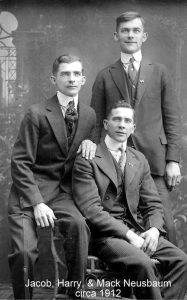 The Kankakee Marsh attracted a wide range of men. After the hunters and trappers came the farmers. While most of these early pioneers were honorable and upright, some were of the unsavory type. Some escaping their past and others were escaping from the eye of the law. Most of later were able to blend into their surroundings much like a hunter in camo. These hermit type men have come to be referred to as “River Rats.” Harry Nusbaum was one such man.

Benjamin “Harry” Nusbaum was born in 1887 in Pennsylvania to John and Malinda Withrow Nusbaum. Harry joined the army and was stationed in the Philippines. In 1911 he was discharged for injuries he sustained. He returned to the US and in 1915 married Kay Greenberg in Chicago. In 1917 Harry and Kay were living in Gary. In the 1922 Gary City Directory Harry lists his occupation as driver, in reality Harry was a petty criminal.

In 1931 Harry was rounded up, with three others, for a series of crimes in Gary and south Lake County. After 72 hours of grilling Harry confessed to his part in the crime.

Harry’s big mistake in his crime spree was when he robbed a Leroy, IN grocery store which happened to house the Leroy Post Office (rumor has it the haul was less than $2). Now Harry faced federal charges! He received a six year sentence in federal prison for the post office robbery. 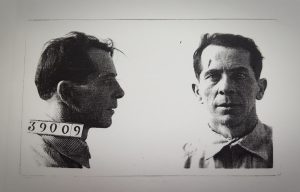 During his life of crime Harry would hide out near Baum’s Bridge in south Porter County. Our Kankakee Valley Historical Society vice-president, Sarah Miller, remembers as young girl Harry’s visits to her home. Sarah describes Harry as a well-spoken man. She also remembers his wife as being very attractive. During one visit, when her father left the room, Harry asked if she wanted to see his gun. Reaching inside his jacket he withdrew a revolver from his shoulder holster. 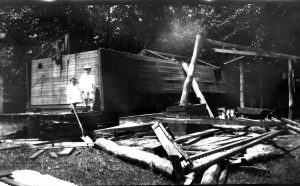 Harry eventually made his home at Baum’s Bridge. After Lew Wallace’s death Harry was given permission to remove the timbers of Lew’s old abandoned houseboat to construct his shack. The shack is still there to this day!

Recently, I received an email from Mark Miller who remembered Harry from the late 1960s. He wrote: “One other story my dad told me probably happened in my grandfather’s time. Apparently there was a group of people holding a ceremony of some kind on/near Baum’s Bridge. It might have been a group affiliated with the Audubon Society or another wildlife conservation group. They were releasing either a previously injured bird, hawk, heron (???) or one being reintroduced to the area. It was a big deal! After a speech or two, they opened the cage and let the bird loose. It flew maybe a hundred yards or so down the river, and BOOM! Harry had his dinner.”

Harry passed away in 1980 at the ripe old age of 93 and is buried at the Kouts Graceland Cemetery. His burial is marked with a small metal maker in the potters section of the cemetery. So marked the passing of the legendary River Rat, Harry Nusbaum.