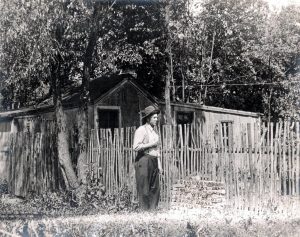 Historian Dick Schmal wrote in “Tales of the People and Places of the Olde Kankakee River:” “Rol Gordon, a Paul Bunyan-type character, is supposed to have roamed the Kankakee Valley for as long as anyone can remember. The buck-skinned giant was said to tell tall tales about the animals in the region, including man-eating turtles and buffalo fish bigger than a man, with scales twice as big as a silver dollar. That old river holds lots of secrets, and some people say that if you listen to the murmur in the wind down the valley, it may be old Rol telling animal stories once again in the “Land of the Wolves.”

The Gordon family settled in the Kankakee Marsh area of south Porter County by the mid-1840s. Solomon “Sol” Gordon was born in 1834 to John and Sally Gordon. The John Gordon family arrived in Indiana by 1844 and established his farm in Boone Township. Sol was the oldest of seven children born to John and Sally. Sol was ‘one with the marsh’ and knew it like the back of his hand. His listed profession was butcher, but his love and knowledge of the Kankakee Marsh was where his heart was.

Around 1875 Sol built a steam powered barge that he used to transport timber to Momence. By that time railroad construction was in full force and the demand for timber was huge with that; and the rebuilding of Chicago after the Great Chicago Fire. Soggy ground conditions made hauling timber by wagon impractical. One day the engine quit — Sol traveled to Valparaiso to fetch Dell Kellogg, who installed the engine. After replacing a gasket and stripped out threads the engine was up and running. Sol and Dell later partnered and formed one of the earliest steamboat businesses of the Kankakee Marsh. With Sol’s vast knowledge of the river and Dell’s machinist background the business was quite successful.

Roscoe Leslie “Rol” Gordon was born in 1858 in Indiana to Samuel and Rachael McCandless Gordon. Sol and Samuel were either brothers or cousins. Rol was born in Ross Township, Lake County, Indiana. By 1870 the Gordon family is living in Union Township, Porter County. In 1883 Rol married Sophia Volke, they had five children. In 1934 Rol’s daughter, Gene Gordon Dye wrote to the Vidette-Messenger about the life of her father. Rol was best known for building and running hunting clubhouses on the Kankakee. In 1896 Rol operated the place at Baum’s Bridge, later known as Colliers.

Rol passed away in 1937. His obituary sums up his life and that of the Kankakee best: “Mr. Gordon was widely known among sportsmen, having been intimately identified with the Kankakee in the days when that entire region was teeming with wildlife of endless variety. The clubhouses owned and operated by him were gathering places where the friend and the stranger were equally welcome. It seems a sad but fitting coincidence that with the ruination of the marsh lands by commercial interests, and the passing of that river paradise, so passed the prime of life for this man, exponent of that era of freedom and Rol Gordon and the Kankakee gradually faded from the picture together, the curtain to rise no more.”