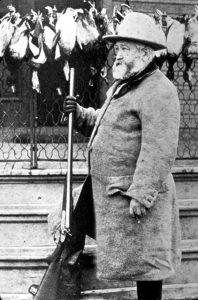 After the railroads were built in northwest Indiana during the Civil War anyone with the ticket fare could experience the wonders of the Grand Kankakee Marsh. People from all walks of life now had access to this “Everglades of the North.” A great number of them were political leaders. The most well-known that I’ve discovered is President Benjamin Harrison.

Harrison’s first recorded visit was in 1873. Hank Brody owned a parcel of land along the present day Sandyhook Ditch— a mile north of the straightened Kankakee River in southwest Porter County. On one particularly stormy day Brody had a knock on his door—it was Mr. Harrison, his son and a man named Bradshaw. The group asked for accommodations and ended up staying the week. It was normal at that time for river guides to house their employers for the duration of their hunt.

The next visit I’ve found was in 1888 when the then President-elect Harrison returned to the Kankakee. The 1888 election was exceptionally brutal. General Lew Wallace was a close friend of Harrison and invited him to rest and recuperate on his houseboat located at Baum’s Bridge. A. F. Knotts was Wallace’s––and his guests–– regular pusher and guide. Unbeknownst to Wallace, Knotts was away to law school during Harrison’s visit. Knotts went on to be a key figure facilitating U. S. Steel’s building a steel mill in Gary, Indiana. Later he became Mayor of Gray. In the 1920s he moved to Florida, where he founded Yankeetown.

In November of 1888 Don Lytle was floating by Baum’s Bridge when he noticed someone was on Wallace’s houseboat. It was not unusual for the local pushers to see visitors on the houseboat, but they were always on the lookout for the uninvited. Lytle was later to narrate that he “floated within hailing distance of the houseboat when a stranger appeared at the rail. He was a sturdy, round-bearded individual. Beside him stood a young man.” Expecting Knotts, Harrison called out to Lytle asking if he were A. F. Knotts and that “I and my son-in-law are guests on Wallace’s houseboat for a few days. We’ve been out this afternoon but got nothing. Can you come aboard and stay overnight, and tell us where to hunt in the morning?” Lytle worked as Harrison’s guide for the next 4 days after which severe weather ended their hunting trip.

Lytle’s story was taken down at a gathering of “Old Timers” at Baum’s Bridge in 1934––nearly 50 years after his first meeting with Harrison. Lytle said that “Harrison could charm a whole audience with his public speaking, but that to meet people individually he was aloof and distant. Well, that’s all wrong. He was the nicest type of gentleman. He wasn’t rich, didn’t throw money around, and he didn’t have a satchel full of liquor. He was gracious but just enough reserved to be the type of man he really was. He came back to the river several times after he had served his term.”

Lytle went on to become the Valparaiso Building Commissioner. He passed away in 1946 at the age of 87.