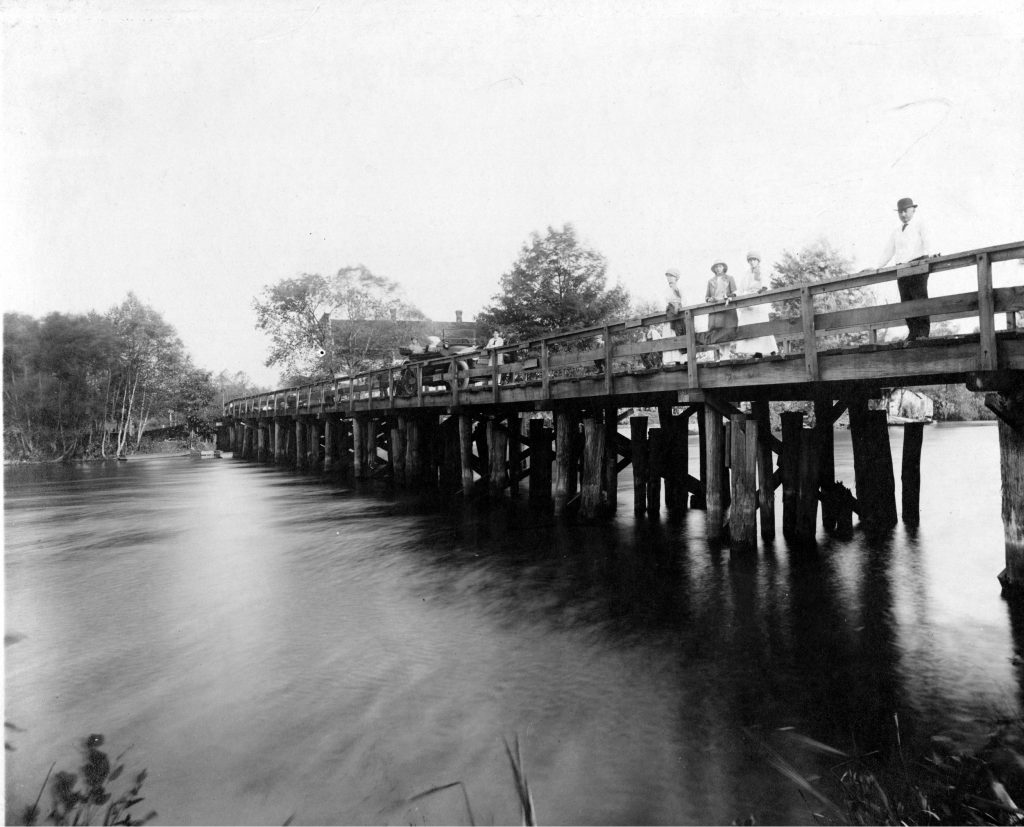 Away back in the chilly autumn oi 1836, George Eaton, with his family, landed on the banks of the Kankakee River at a place known in the early days as Pottawatomie Ford. He built a log cabin on the right bank of the river. He was one of the courageous pioneer settlers redeemed the country from superstition and savagery. 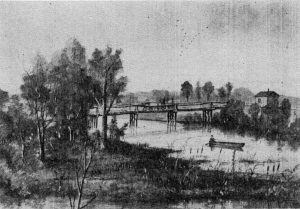 He began pioneer life as a ferryman and ran what was known as the Eaton Ferry. He would transfer people from the Porter county side to the sand ridges in Jasper county. At the season of the year when the water was high the distance was about a mile and a half and part of the way was through a dense swamp and a pathless marsh.

In 1847 or 1848 there was a United States mail route established between Michigan City and Rensselaer, Indiana, and Mr. Eaton had the contract to carry the mail across the Kankakee Swamps. In the winter time was the river and marshes were frozen up it was somewhat difficult. But in the summer season when the water was low the mail was either carried through the swamps and marshes on horseback or stage.

In the winter of “49” Eaton built a bridge across the river. This was the first bridge built on the Kankakee above Momence, ILL. On the following summer it was burned, it is supposed on account of it being a toll bridge. Mr. Eaton continued to run the ferry up to the time of his death which occurred in 1851. His remains were laid at rest on a beautiful knoll near the landing place.

Mrs. Eaton, a woman of remarkable nerve and strength, continued to run the ferry and deliver the mail on the south side. At times the water was so high that it could not be carried by stage. As I have said, she was a woman of courage and strength and there were but few men who could excel her with the oars.

One morning about daybreak two men on horseback arrived at the ferry and wanted to be hastily transferred to the main land on the south side. They said they had to be in Rennsselaer by noon, as there was going to be a Government land sale at one o’clock that day and they wanted to be there at the opening of the sale. The recent rains had raised the water in the river and marshes that one-fourth of the way across would swim a horse. Through the timber they could ride their horses as the water was from knee to belly deep to a horse. Mrs. Eaton told them she could ferry them over one at a time but it would delay them about an hour and a half or she could take them both over at the same time and that there were places that they could swim their horses and that they could ride their horses until the water got too deep to wade then they could get into the boat and swim the horses alongside the boat. They decided to go together and took passage per “skiff” and horseback riding their horses when it wasn’t too deep. In less than an hour they were landed safely at Sand Ridge Landing in Jasper County. This is one incident mentioned which is only one of the many daring feats of this kind in which Mrs. Eaton showed her skill as a boat’s woman.

Late in the afternoon of the next day the sheriff of LaPorte County, Indiana, arrived in the ferry looking for two stolen horses taken from a farmer near Doorville and the description of the men and horses tallied with those that Mrs. Eaton ferried across the river. There is no doubt but that they were the men wanted at LaPorte. The chances for getting away and hiding stolen horses in the sand ridges on the south side of the river was much better than on the north side as the country was not so well settled.

Many a stolen horse has been hidden away on these swamp islands which were never found by their owners. Horse stealing in those days was a very frequent occurrence. Mrs. Eaton died in 1857 and was buried beside her husband in the family burying ground near the landing.

After the death of Mrs. Eaton, a man by the name of Sawyer cam in possession of the old ferry. He built a bridge in “57.” As the bridge was not substantially built the ice and high water of the following spring took it out. Sawyer then ran the ferry again and carried mail for three or four years. He also put up a sawmill on the banks of the river and did a good lumber business. Many of the logs he sawed were rafted down the river.

In 1860 he sold out his business to Enus Baum, who operated the mill and ran the ferry for a few years. Baum built a bridge that stayed in and was used until the close of the war when the County Commissioners of Porter and Jasper Counties jointly took over the bridge and made it free. Later on, they made a grade through the swamp of timber and sand as far as the timber line. It was several years before the grade was completed across the marsh to the dry land. This was the last of the toll gate system in Porter County. In fact, it was the last in Northern Indiana. When Baum built the bridge, it stayed in. This was known, and is to this day, as Baum’s Bridge. And yet Eaton built a bridge across the river at the same place fourteen years prior to the building of the Baum’s Bridge.

It was at this ford that Major Irwin crossed the Kankakee when he was giving notice to all the Indians along the Kankakee Swamps to be ready to leave in the early summer for their homes beyond the Mississippi. Also, it was at this ford where General Tipton crossed the river while gathering up the children of the forest to their far-off hunting grounds toward the sunset. 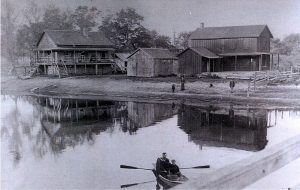 In 1878 a party of hunters from Pittsburg, Pa., built a club house at the bridge and they put on the river a small steamer, “Little Rhoda” which played between English Lake and Long Ridge. They came to get a shot at a webfoot duck, and many years hunting on this stream have brought me face to face with many good fellows that belong to the hunters’ fraternity. Some of my most pleasant recollections that were printed on my memory were scenes around a hunters’ camp. I have often regretted I did not keep a diary for many of the talks around these campfires are worth recording.