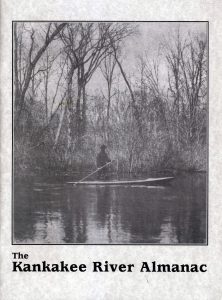 Just about fifteen years separated the writings of two Porter County authors. Their subjects-the people, places and events of early Lake, Jasper, Newton and Porter Counties, and the Kankakee River Valley area-provided substantial material for the creative works of these talented men. The stories that rsulted from their observations comprise this publication, which is a vivid portrait in words of late nineteenth and early twentieth century life along the Kankakee Valley River area.

William Wallace was a very private person. His personal life remains a mystery long past his death. Born on August 16, 1888? (the exact year of his birth and place are not recorded) he married Eugenia in Chicago, Illinois on April 1, 1928. They made their home in Liberty Township.

William Ormond Wallace is best known for the popular “Stroller” stories series, published by the “Vidette-Messenger” in the 1950s and 1960s. Wallace wrote more than 700 “Stroller” stories with his last article appearing on August 30, 1962, when he retired from the newspaper. William began his career with the newspaper in 1953 after his retirement as a journalist and typography teacher in high schools and colleges. Wallace said of his stories, “some are true, some partially true and some legendary.” He wrote of unsolved mysteries, crimes, towns and the people who left their mark as they passed through the area.

In stark contrast to William 0. Wallace, Arthur J. Bowser led a very public life. His life was an open book—born October 28, 1862 in Valparaiso, Indiana; Arthur J. Bowser was of French, Dutch and English ancestry. He married Annette Drago on March 24, 1883 and together they had three children, two daughters and one son.

As conductor of the “Siftings” column in The Vidette-Messenger, he went up and down the county preparing articles about Porter County men and women of distinction and achievement, and relating accounts of events and incidents both past and current that had a wide public interest. It was noted that his passing, on July 17, 1935, removed one of the most interesting and widely known figures in northern Indiana newspaper circles. His articles no matter what the subject were always interesting, for he had a singular knack of presenting both facts and speculation in a way that caught and held the readers’ attention.