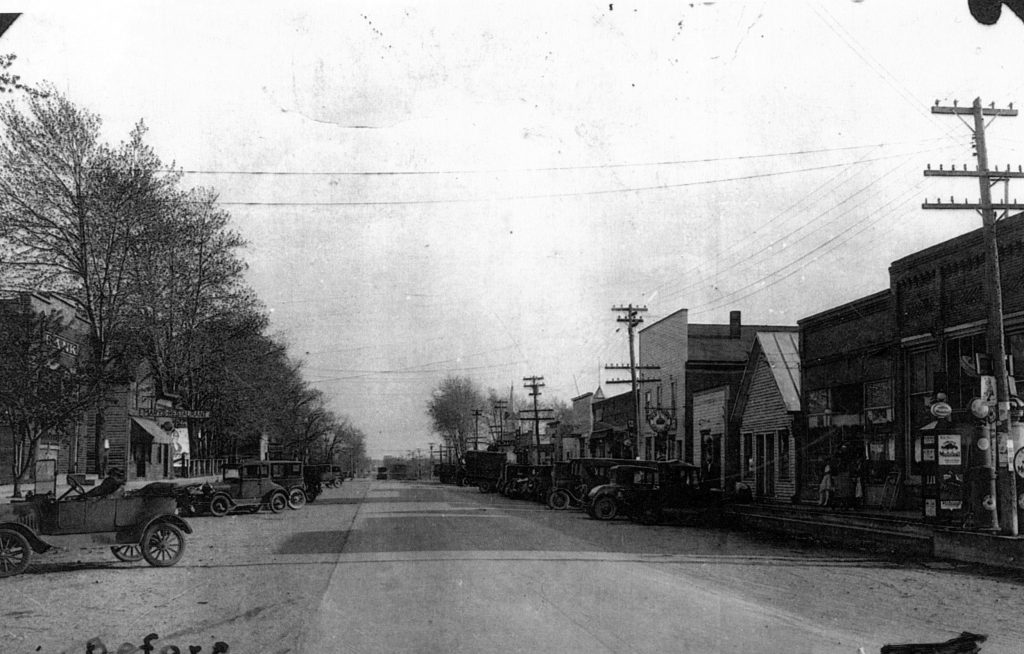 I was born July 25, 1910 At Thayer, Indiana and I spent most of my grade school years there except I moved to Hammond and was there in the fifth grade. Then I came back to Thayer in the sixth and lived with my grandmother there. I graduated from Thayer grade school in 1924. In those days all the schools gathered and went to Kentland, Indiana where we had one large graduation in Kentland and the County Superintendent was a man by the name of Shanglov. After graduating from Thayer I worked on a farm for Benson’s for one dollar a day and my board. 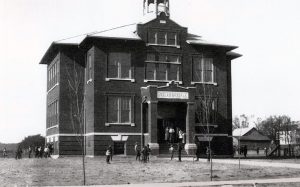 That fall they didn’t have a high school in Thayer or any place for us to go to high school so I went to Crown Point, lived with my sister and sent my freshman year in Crown Point. The next year they arranged for us to ride the Thayer school bus out to Bushman’s corner (11051 N 1200 W) where we met the DeMotte school bus, transferred, and rode in it to school. That was my second year of high school. Then the following year they arranged to have a bus all the way from Thayer to DeMotte for us. I believe that was driven by Chet Fuller. After that the school bus was driven by Fred Hoffman and his wife, hauled us to high school. I graduated from high school in 1928 but during that year in 1928 I met Frances Summers who was a freshman and we started going together after the freshman initiation and after I graduated in ’28 she graduated in 1931 and that summer we were married. We were married for 23 years. She passes away October 9, 1994. 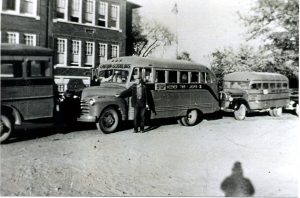 I forgot to mention that when the DeMotte school bus met us at Bushman’s corner, the driver of the bus was Did Gleason, we was in an old Model T bus at the time.

We have two children, a son James, named after me, and a daughter Joan. Joan lives in Elmhurst, Illinois and Jim lives in Westlake, Ohio near Cleveland and works for LTV. I might add that I started working for Goodyear in 1929, I worked as a serviceman at the Shore Line Motor Coach Bus Lines in Hammond, Indiana. I worked there until November 1921 when I was laid off during the depression. I was laid off for six and a half months, then I got called back and worked at the Chicago Worlds Fair taking care of Greyhound buses that transported people in the fair grounds and taking care of different fair exhibits Goodyear had there. In November, in the fall, when the fair was over I was transferred back out to Hammond where I worked as a serviceman until I was transferred to Chicago in 1943 where I was an inspector on surface lines which later became CTA. I worked there for a couple of years and then I was on what they call tire maintenance for two years and I spent one year in Omaha, Nebraska working. Then I was transferred back to Chicago and was made assistant manager of the Highway Transportation Department where I worked until 1958 and when I became manager and I retired in 1975 after 45 years of service.

We decided to sell our home. I didn’t mention that we lived in the Chicago area for thirty years, the last six years we lived in Des Plaines. The reason my job was discontinued in Omaha was because it was a job they started during the war to conserve rubber on large truck fleets and since this was over they decided to discontinue that kind of work. It was actually to help truckers save money on rubber. We then moved back to Chicago. We lived in Chicago until I retired in 1975. We decided to build and live in DeMotte. We moved to DeMotte in April 1976 and have lived here ever since. 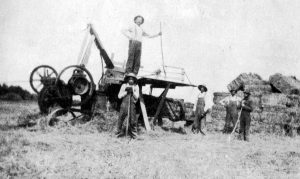 When I was young and growing up in Thayer, I’d like to relate some of the experiences I had there. I don’t know if many people know, but all that farmland west of Thayer was then marshland. In the summertime they’d make hay there, pressed hay, it was wild hay and they shipped it into Chicago for packing purposes. And in that marsh they drilled for oil, had an oil well drill, and they struck oil. For a time they did ship some oil to Chicago and they had gas they ran into Thayer and we had some street lights. I was real small then. My grandmother and other people had gas plates put into their heating stoves. Some of them even their cook stoves, and used that gas for heating and cooking. It seems as though all of a sudden it ran out and that shut down, but a lot of people thought there was still gas and oil there. 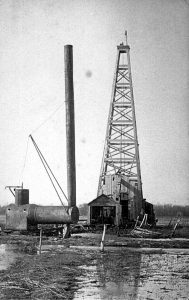 In the wintertime when the marsh would be flooded it would be covered with ice, we could skate out there. We could skate for miles. Some of us rigged up some sails and had the wind take us across the ice. I also would like to mention that article that was in the newspaper where it showed Keppering’s Hotel and they said they didn’t know where it was located. That was located in Thayer on the corner of 55 and State Road 10 where the road from DeMotte comes in. There’s a small tavern located there now. That hotel and restaurant burned down when I was, I think, when I was about probably eleven years old. I remember it burning at night. In those days we didn’t have any fire departments. I was living with my grandmother and we went to bed early. My uncle came down and woke both of us up so we’d be up. He was afraid the sparks might fly because we lived only a block from the hotel when it was burning. But they managed to keep it under control, no other buildings were lost except the ice house next to it.

I didn’t mention that the hotel there had a large ice house. In the wintertime they’d cut ice out of the river and marsh and they’d store it there and pack it with hay and straw and then
have it to use the following summer. 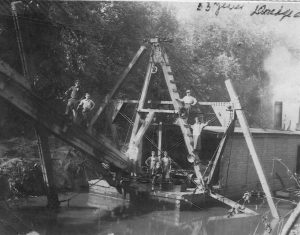 When I was in the primary school in Thayer, one of my experiences was getting to see the dredge boat that straightened the Kankakee River when they had it. They took our class down there on a tour through the dredge boat, which later in years to come, after the river was what we call straightened, well finally the marshland was drained. Now it’s farmland. They grow some real good crops there.

During the summer when I was going to DeMotte High School, between my second and junior year, I worked on an extra gang on the New York Central Railroad, having hired in at Shelby, Indiana. We laid steel, put steel railings and when they finished with that they moved to Momence and I lived with a group of other men in a train car in Momence. We ate in a restaurant there. We were raising track. I finished out that summer until I went back to high school. The following summer between my junior and senior years I also went back and worked for a month or two.

I don’t believe I mentioned that when they were making hay west of Thayer that I drove a team of horses and hayrack and raked hay for the hay press. I distinctly remember on my twelfth birthday working that day and when i came home that night my grandmother had a party for me. My mother, who was working in Hammond, had shipped me a new bicycle. They put that together and had it ready. It was a great surprise for me.

Also, I didn’t mention when I was going to high school in DeMotte, during the winter I’d work Saturdays for Benson’s who were in the wood business. I was cutting wood and they would ship it to Chicago for use in bakeries and places that made sausage. I got $2.50 a day. 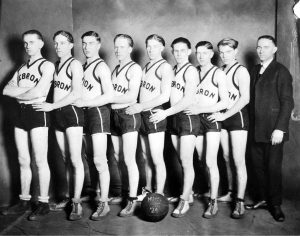 When I was going to DeMotte High School we didn’t have any sporrts activities until my senior year. They started a basketball team which had been dropped years before I came here. We played in the building where Fagen has supplies now (915 S. Halleck). That building was originally built, I was told, as a theater. That’s where we played our basketball games. We played such schools as Kniman, Fair Oaks, Remington and Rensselaer. Then they had the sectionals, or course, when Newton County would be in it also. Naturally we didn’t get very far, but they did also hold a county tournament and we won a couple of games there, but I did get picked for the second ball team as forward. Ned Benson was picked as center. Of course, that wasn’t too much to brag about in those days.

They also started a girl’s basketball team. In those days a team consisted of six girls and two forwards, two centers, two guards and they each played in their own section and didn’t pass that. My wife Frances played all four years and she was put on the first All Conference Team.

This concludes the interview with James Dickey.