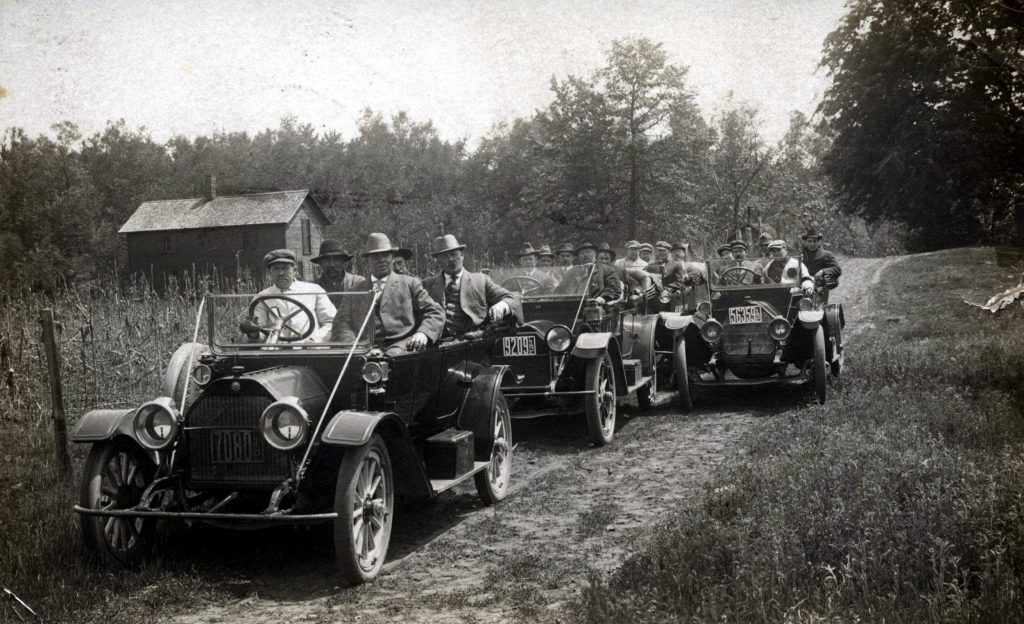 The great fleets of motor trucks which crowd their way regularly into Chicago’s southwest side, bringing in Florida’s Indian River oranges and grapefruit; Georgia’s peaches; Virginia’s winesaps, and other products from the remaining south and southwestern states, equally important to the well being of this great metropolitan area have their choice of two direct highways out of Vincennes, Indiana. They are National 41 that comes all the way up from the tip of Florida, and Illinois 1, the old Dixie Highway. Forty-one proceeds up through the highly populated Calumet area, while Illinois 1 loses itself in Chicago’s great State Street. The first known main thoroughfare up from the south into a village destined to become the heart of commercial America was the Chicago-Vincennes Road.

As, with all old roads, the Chicago-Vincennes road was first an Indian trail. It was used chiefly by the Mascoutins (Prairie Potawatomi) from the Ohio and Wabash country to Lake Michigan. In 1834 the Illinois State Legislature approved a road from Vincennes to Chicago. In the main, it was designated to follow the trace marked out by Trader Gurdon S. Hubbard, who had used the Mascoutin’s trail. There were eight hundred inhabitants settled at the mouth of the Chicago River, and the place indicated it might grow.

There were the usual diversions and feeders catching up with it as it ran zig-zagging to the north. Indiana ran a feeder by way of Williamsport, following the action of the State Legislature in 1829, which laid a road from Indianapolis to Crawfordsville. From Williamsport a tendril ran northwest past modern Boswell to Parish’s Grove and on to the state line near Raub. An extension of this road west to the line joined the Vincennes-Chicago Road at Bunkum, a few miles north of present Kentland, the site of Hubbard’s trading post.

At Parish’s Grove in Benton county the main trace was joined by a feeder which came from the Wea towns of the Wabash region.

The trail was in its heyday from the early 1830’s to the late 1840’s, and was a slow, muddy, artery of traffic into the log cabin settlement. During these years daily trains of covered wagons brought the Wabash farmers north with their food stuffs. Then, as now, grains, hogs and cattle, smoked hams, bacon, lard, butter, poultry and garden vegetables found ready market in the settlement, which in two years after the opening of the road had grown to 4,000.

Originally there was a choice of three crossings located within a mile that might be used over the Kankakee River as the trace proceeded northward. There were the Narrows and Blue Grass crossings, or Thayer’s Landing, where Hubbard had a fur depot for years, and the famous Upper Crossing, variously known as Westport, Hills Ford and Lorain, nearest the Indiana-Illinois state line. A mile above present Momence, the Day’s ford was a favorite with drivers over the road. They were enabled to eliminate many miles of heavy sandy road by crossing here and following the trail around to Momence.

The road when laid out was marked by milestones. No. 179 is preserved northeast of Momence, and a historical tablet embedded in a low stone block at the northwest corner of 95th street and Vincennes avenue, an intersection out on the rapidly growing prairies of Chicago’s South Side, is another marker.

Over this trace in 1811 came Capt. Heald of Fort Dearborn bringing his southern bride. They traveled from Kentucky on horseback through the wilderness. With the bride came her slave girl, Black Cicely, who was to die in the Fort Dearborn massacre on the Chicago-Detroit road a year later.

Imagination alone brings back the Wabash wagonier, the business man in his tightly buttoned Prince Albert coat, and high plush hat, the women in printed calicoes, alpacas, or linsey-woolsey, shoulder shawl and slat bonnets, coming up the road over a period of years in all sorts of conveyances, from the covered wagon, horseback, and the two-wheel cart to the fine surrey.