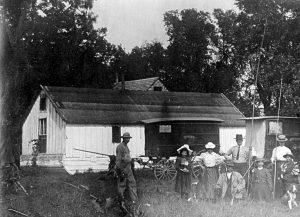 The Hall family in front of houseboat

The Hall family story is one of the more interesting Kankakee River tales. Edward Hall was born in Ireland in 1812. He immigrated to Canada with his wife, Ann Maxwell, where they lived for two years and then on to Indiana in 1836. They owned property in section 6 in Pleasant Township, Porter County. Major McFadin was a close friend of Edward Hall’s and wrote this: “I was acquainted with him for over 20 years, and he was a good, kind man, and had a large family of boys, all hunters and trappers, and they lived like Robinson Crusoe in the wilderness, without any neighbors within 5 or 6 miles of them, and I begrudged them their happy and wild life, and would like to have joined them in their romantic home near the banks of the Kankakee.” Edward died in 1881 and Ann in 1914.

James was born to Edward and Ann in 1853. James married Nancy Cannon of Kouts in 1875, they had 8 children. A majority of the following comes from the writings of historian Richard “Dick” C. Schmal as was told to him by Kris Hall, the grandson of James.

James and Nancy Hall lived in San Pierre, Indiana. James was working stacking hay on the Brown Ranch near Shelby, Indiana. He heard that a dredge barge was for sale and purchased it. In 1900 he decided to move his family to Shelby on the barge that he converted to a houseboat. The houseboat was 34 by 14 feet in size. Schmal writes: “There were nine family members who made the trip: James and Nancy, along with daughters Ella, Daisy, Dora and Hazel, and sons Elmer, Millard and John (who was just a baby). Also, several old hound dogs, a flock of chickens and barrels filled with staples such as flour and apples added to the clutter.”

The Hall family moved slowly down the Kankakee. “In late November they finally reached the 3-I railroad bridge above Shelby. Here they had to stop for the winter because they were driving pilings for a new bridge… In the late spring of 1901 the new bridge was completed and the old pilings were cut away, leaving room for the barge to pass through.” writes Schmal.

The Hall family found a place near Shelby. “The family lived on the floating houseboat for a period of time until it began to leak so badly that it had to be pulled onto the bank, where they lived for several years (at least through 1917), paying five dollars rent annually for the site.”

Around 1910 James leaves his family in Shelby and moves to Florida. His obituary dated July 23, 1920 reads: James Hall, known as “Dad”, was found dead on Shell Island in his bachelor’s quarters Sunday afternoon by Tom Williams. As near as could be ascertained the old fisherman came to his death from natural causes. The only articles found in his pockets were receipts for dues paid the Odd Fellows Lodge. He had been living on Shell Island, acting as fisherman and guide for a number of years, and living the life of a hermit.” Nancy died in Shelby in 1945.

The Halls were a large family and many descendants remain in Northwest Indiana to this day.