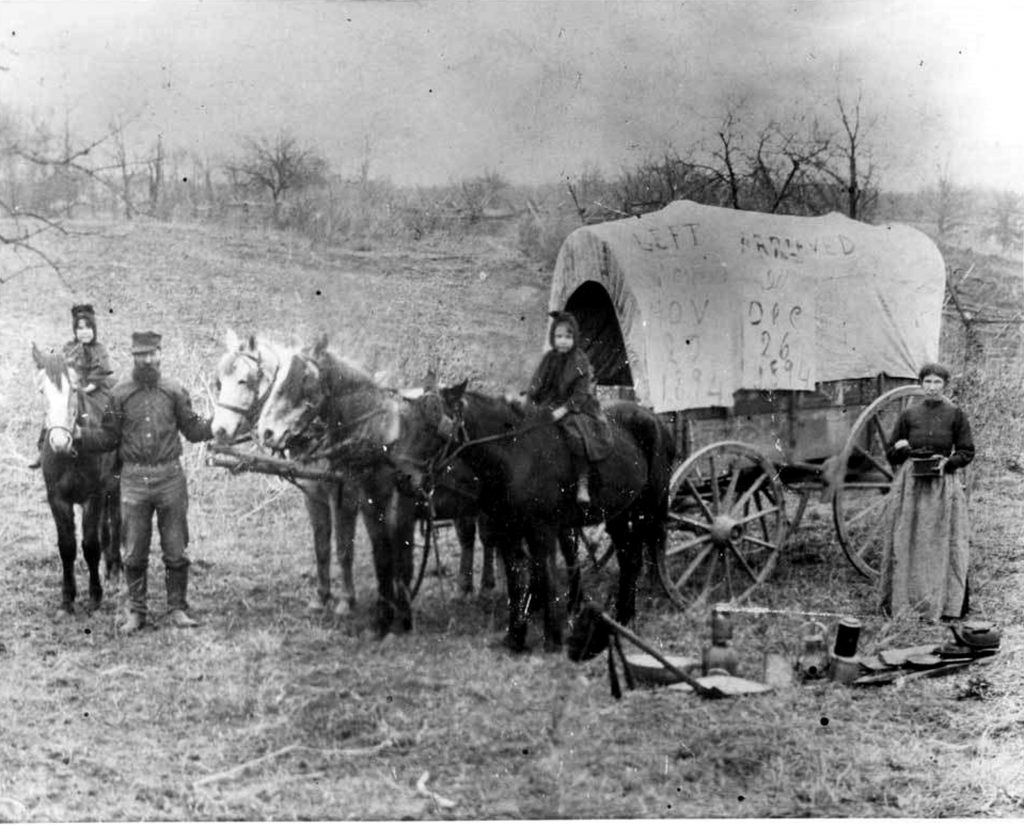 “And God began sifting a nation that he might send choice grain into the wilderness.”

Prior to the 1829 the tract of country which is now the county of LaPorte was without a white inhabitant. But in that year the historian records, “intruders began to arrive.” The name LaPorte (French for door or gate), stood open to all who cared to settle at a spot, where, “in all the west, prolific in beauty,” there was not a lovelier region. Here was the upper Kankakee. 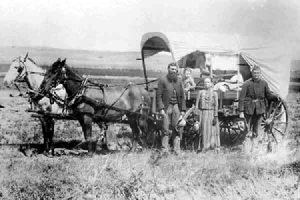 One year later, St. Joseph county, mother of the Kankakee, was founded. Had our Vermonter, Amasa C Washburn, tarried in South Bend, which city was to make the county well known in the carriage days of the “gay nineties,” as he made portage from the St. Joseph to the Kankakee, he might have gone into business with the first merchant and banker, Horatio Chapin.

But there was not even a house between South Bend and Harris’ Prairie, not so much as a wagon road in that year of 1831. So, undoubtedly, the traveler wasn’t much impressed with the place, and was quite satisfied to be pushing on to Baley’s Grove in the Illinois country. 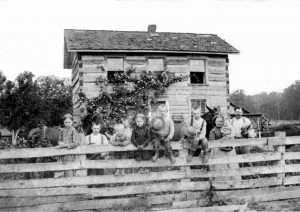 However, had he chosen to remain for only a short time, he, no doubt, would have availed himself of the hospitality offered by Benjamin Coquillard. That energetic young man had opened a new tavern, the “Union Hall, a house of Public Entertainment.” General satisfaction was offered to all who paid his establishment a call, so read his advertisement, “due to his long experience in setting a table with the best the country afforded, having a bar supplied with the choicest liquors and a wife who was a fine cook.”

Let it be known the proprietor kept well-hidden his receipts for each day in an old straw hat secreted in one of the recesses of the huge fireplace chimney until his brother, Alexis, the family banker, called.

But Union Hall was honored that winter, by no less a personage than the Reverend N. B. Griffith, a Methodist missionary. The minister organized the first Sunday School there, and probably participated in the rumpus over naming the city.

The town had at first been called South Bend. Later some dissatisfaction had been expressed over the name and many wished to change it to Southold. Finally a meeting of the citizens was called.

“Who would think of calling a town by the name of south bend-a bend in a river, the name of a town! Unthinkable!” Ear-splitting were the opinions aired at the meeting. But despite the arguments to the contrary, the original name held. Madore Cratee, captain of the Fairplay, continued to come down the St. Joseph and unload his little freighter at the south bend in the river. South Bend it is today.

In just one more year enough people had made land entries that court was being held at the tavern of one Calvin Lilly, and Hannah Redding was being granted a divorce from her husband, Matthias-cause not recorded-but the fine of five dollars imposed upon Sarah McLelland was for selling liquor to the Indians. And in Union Hall tavern was born the first white child in St. Joseph county, Frances Coquillard.

This same year LaPorte county was coming to the front. Michigan City had been laid out at the mouth of Trail Creek by Major Isaac Elston, an intrepid young Army man. It was an ideal spot, the Major thought, and Elijah Casteel was licensed to keep a grocery store. That very important fellow, the blacksmith, tacked a horseshoe over the door of his establishment indicating he was open for business. His name was Asa Warren, but the Indians called him Wishteaubish, the blacksmith-by-the-sea. Asa tied a deer-hide apron around his waist, lighted the fire under his forge and became a man of importance not only in his own community, but to the traveler enroute to lands beyond, as well.

He was a man to be relied upon to shoe a horse, tighten the rim on a wagon wheel or sharpen a plow-share, the while he advised a detour around towering “Hoosier Slide,” cross country roads to the best corn land. Asa knew all the answers. The large number of emigrants returning to far eastern homes, sick and discouraged with life on bleak prairies, made reports to Asa on overland routes west.

The city was young and full of promise. It soon became a great market for produce and supplies. Farmers of the tributary region extending far to the west and south, gave it almost undivided patronage. Here was the post office for people as far as twenty and thirty miles away. People reckoned distance of every point for miles around the city. Twenty-Mile Prairie took its name from the measure of distance that separated the two points. 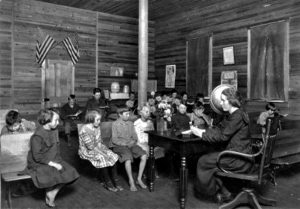 In 1834 it had its first school building and in two more years was demanding a little attention from the federal government. Traders and business men wanted a lake harbor to accommodate incoming vessels. So by 1836 enough pressure had been brought to bear on the powers that be that $20,000 was appropriated for that purpose. That amount, of course, was only a start on so great a project, but start it was and the next year $30,000 was added to this amount. The possibilities of the city were at last recognized. 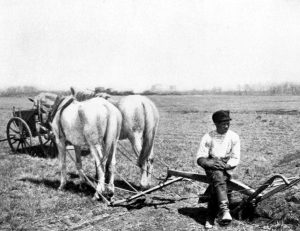 St. Joseph and LaPorte counties were now running neck and neck, with the city of LaPorte growing to be another important trade center. A land office and a government patent office were established here in 1832. Soon the city was supplying building material for a wide area. Apple and peach orchards and small fruit farms spread over the countryside. Johnny Appleseed had come this way.

In three years from the date of its first settlement, LaPorte county was recording a permanent settlement of one hundred families. But at that time, remember, the county was a large one. It extended across to the Illinois state line. Is it boasting to say that population figures in the 1940 census read 63,660 and remind you that in 1836 she lost the present counties of Porter and Lake, land on the west south to the Kankakee River by a shifting of boundary lines, or that in November of 1945 she was planning the erection of a city hall at an estimated cost of $80,596? Or that commercial harbors off Lake county, just prior to World War II were handling 15,000,000 tons of waterborne traffic between this region and the harbors of Canada, Great Britain and other European countries, with this figure logically stepped up during and following the Second World War years. Two counties alone reflected population patterns and volume of business exceeding even the wildest dreams of Jonathan Jennings as he platted the state capital!

The brothers Morgan, Jesse, William and Isaac, coming up from Monongalia, Virginia, with their families, in 1833, looked upon Michigan City and LaPorte as “getting a bit crowded” and went “a little farther west.”

William and Isaac picked out a prairie for themselves inland from the lake, which was forever to bear their name. Morgan Prairie. Their cows’ bells tinkled across lush pasture land. They became co-organizers of Porter county, aligning themselves with such men as Jesse Johnson, Seneca Bell and Adam Campbell.

Jesse and his family settled on section six in the present Westchester township. A new road was running across country, along the edge of the lake, connecting Chicago and Detroit. Already the company of Converse and Reeves was operating stages making three round trips weekly between the two cities. It looked to Morgan that travelers and drivers might appreciate tavern accommodations enroute, so he took advantage of the opportunity and opened a hostelry. It was christened the “Stage House” and the clear, shrill horn of the stage-coach driver brought mine host to the door to welcome his guests over a period of years. 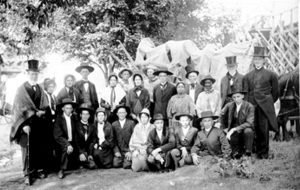 By the time Michigan City was getting its first school house and its harbor, Portersville was getting its first log house; and a town, later to be known as Valparaiso, and become famous on account of a “poor man’s college,” had J. P. Ballard to thank for it. This same year the Reason Bells presented the county with its first male citizen by right of birth, and a cradle in the Stage House, rocked the Jesse Morgan’s baby daughter, Hannah.

By 1837 Porter county was assured a courthouse and a jail, to be located at the county seat. But the first man to hang from the gallows was surrounded with the beauty of all outdoors on his dying day-the eyes of the people upon him.

Following his conviction of wilfully murdering a man named John Pelton, to whom he had pledged “safe conduct” through the dunes country as he was enroute to Chicago, Francis Staves was hanged. The good people of the community piously embraced the opportunity to teach an unforgettable moral lesson to the youth.

In a grassy hollow, surrounded by virgin forest, a scaffold was erected. The surrounding hillsides furnished convenient seats for the onlookers. By early morning on the fateful day people began entering the village in lumber wagon, on horse-back, and on foot, fortified with picnic lunches, to await the event.

The minister, black-frocked and looking quite severe with his best Sabbath day air, the sheriff, the choir of the Presbyterian church and their leader in his Sunday best black stove-pipe hat and broadcloth, accompanied the doomed man through the town to the scaffold. The torments of hell rained from the lips of the preacher upon the damned and the neardamned. Staves saw the error of his ways, and made good confession; the choir sang a requiem, and the choirmaster shook the prisoner’s hand as the sheriff sprang the trap. The climax was ghastly. Women who had come to be fascinated with the gory scene, remained to faint. Children screamed. People with delicate nervous systems were ill for days. But the real headache was for the commissioners, Messrs. Jones and Walton.

The jail had been considered inadequate for so important a criminal. Therefore he had been transferred to the more secure building at LaPorte, to await the fatal day. The jailer, Joseph Seif, had been allowed $30.63 by the Porter county commissioners for keeping the prisoner. Apparently he felt himself underpaid, and wrote the board:

“Sirs: I have just ascertained the amount of my allowance made by you for my services rendered your county in dieting Staves and other contingent expenses for him. In the first place I will say to you that my bill was reasonable; that 50 cents per day is not a fair allowance for dieting a man three times a day.

“You must remember that every article of provision was very high and that the 31 cts law was past when all was cheape.

“It was cold for him to doo without fire and I was compelled to furnish it.”

Also Seif added to his claim the expense of a physician, tobacco and a minister, stating the additional allowance to be $15.37.

Porter county’s one man show had cost a pretty penny.