Fur trappers important back in the day 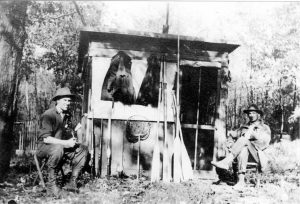 A very important figure in Kankakee River history was the fur trapper. From earliest times up until today fur trapping of the Kankakee Marsh has been an active pursuit. Demand and price has fluctuated, but the industry has always existed. This has been a business that both the Native American and white men engaged in. Today trapping is not as popular as in the past because of low demand. In 1883, Major McFadin wrote this about the fur trapper. “The Kankakee still retains its place as one of the best trapping grounds in the State. Every six miles of this river is taken up by trappers who make a fair living catching muskrats, mink and a few otter. A fair average catch per day is 30 rat. Fall rat skins sell at from ten to fourteen cents. Spring rats are much higher in price, usually bringing twenty cents.” J. Lorenzo Werich wrote: “during the Civil War a mink hide would sell from $4.00 to $9.00 and a good coon skin would bring $4.50.” With their wealth of knowledge of the marsh the Kankakee trapper often supplemented their income by acting as guides for the sportsmen.

Werich in his “Pioneer Hunter of the Kankakee” wrote at length about the trapper’s life on the Kankakee and what brought them to the marsh. “As gold and gems was the magnet that attracted our Hoosier folks to the Far West, so it was the fur trade that brought the early explorers to the Kankakee region.” With no established hunting ground many disputes sprung up. Werich writes: “So some of the old pioneer trappers got together and established what is known as a trappers’ claim…and were divided by a line running north and south as the river is supposed to flow…and was from 2 to 10 miles in width.” McFadin wrote that although prices for rats are low in the fall “trappers are compelled to catch rats in the fall in order to keep others off their ground.”

McFadin sums up the character of the Kankakee trapper. “A majority of these trappers are hard working, intelligent, honest men, with homes and families. Occasionally, however, a man is found devoid of all instincts of decency and fair play, a veritable Pariah amongst the flock. Their lives, however, as trappers, usually cease after one season.”

Early traps were crude devices constructed out of logs, sticks, twine and rope. They were effective, but inefficient. The introduction of the steel trap was the solution. Werich wrote: “In the fall of 1845 Harrison Hartz Folsom and Rens Brainard” went to Hebron and engaged blacksmith John Alyea “to make them three dozen steel rat-traps at one dollar each, and four two-spring otter traps, or wolf traps as they are sometimes called, at three dollars each. These were the first steel traps made and set in the Kankakee country.”

Early trappers of the Kankakee Marsh have a checkered reputation. On the one hand they are often referred to as “River Rats” of low morale character and other times acknowledged for their work ethics, resourcefulness and grit. Probably both descriptions are accurate.