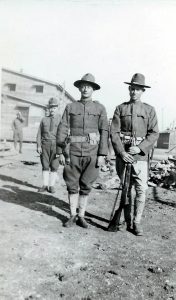 Many types of men with various backgrounds and aspirations were drawn to the Kankakee Marsh. Some were honest and upright and some were a wee bit unsavory. J. (James) Wesley Johnson was of the later group.

Johnson was born in 1886 to James F. and Emerillas (Merriman) Johnson in Columba City, Indiana. Tom Johnson is the grandson of J. Wesley and has done extensive research into his grandfather’s life. His study provides the majority of the information that follows. Tom describes his Grandfather as a “troublesome man.” He seems to jump from one nasty situation to another. In the spring of 1916 Emerillas purchased the Donley Resort at Baum’s Bridge, and soon moved her family to Porter County. Emerillas was very ill at the time of the purchase. J. Wesley being the unscrupulous man that he was worked to have his dying mother sign over the property to him. This pursuit crated a dispute between J. Wesley and his father.

Hold on to your hat, this is an amazing and somewhat confusing story. A few days before J. Wesley’s mother’s death J. Wesley tried to secure his mother’s signature on a check for $170. His cousin, Floyd Albright, was present and interfered with the plan. J. Wesley tried to shoot Albright in reprisal. This resulted in J. Wesley and his wife to be thrown in the Porter County jail for assault and battery with intent to kill. J. Wesley was later released on bail. Porter County Constable M. S. Campbell was taking J. Wesley home to Baum’s Bridge when 3 shots were fired at them. The shooter escaped and the constable returned J. Wesley to Valparaiso for his safety. The shooter was allegedly J. Wesley’s father. It was believed that somebody informed his father of his son’s return home and his father lay in wait for his arrival. A warrant for Johnson’s arrest was made for murderous assault with a deadly weapon. Mr. Johnson claimed that he acted in self defense. He maintained that while locking up the tavern a man approached him in the dark. He ordered the man to stop, but he continued to advance at which time Johnson fired his revolver at him. I assume the charges were dropped.

Wesley and his father reconciled their differences and peace seemed to have returned to Baum’s Bridge. But, that was not to last! Within a month J. Wesley was found guilty of dynamiting fish and sentenced to 6 months at a state penal farm. Less than a month later J. Wesley escaped the penal farm and was reported to be heavily armed and hiding out along the Kankakee between Baum’s and Kahler’s Bridge.

After his capture I believe that J. Wesley was given a choice of serious jail time or enlist in the army. He chose the army. After his service he moved to Kansas City and was killed in a car accident in 1938, soon after his fifth marriage.

Wesley Johnson led a life that was in perpetual turmoil. Unpleasant that it be, I find stories like J. Wesley’s fascinating! Another example of the diversity of people that make the history of the Kankakee so interesting.