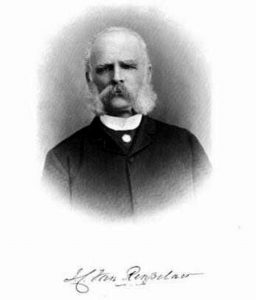 The Founding of Rensselaer …

Editor Republican: – I notice in your Journal of the 11th inst., an article entitled “A History of Rensselaer.

Permit me to correct some of the inaccuracies of that article, which otherwise is quite creditable to its young author. I presume I am the only person living, who, of his own knowledge, can give an account, in every way correct, of the purchase and earliest settlement of the place now known as Rensselaer.

My father, James Van Rensselaer, and myself, first visited Indiana in the fall of 1835. We were ten days crossing Michigan, from Detroit to St. Joseph. then we went to Niles and from that place, by the old Territorial road, to Logansport; where we rested several days upon the advice of Senator Tipton, to whom we had letters. From thence, South through the State. Our object was a study of the country, with the view of investing money, the following season, in the purchase of government land.

We returned in early May of the following year, 1836, entering the State at Evansville. Leaving my father at Lafayette, I went with Mr. Benjamin Reynolds to his home in White County, near Monticello. From Mr. Reynolds, Mr. George Spencer, and Mr. William M. Kenton, I gathered much information respecting the surrounding country, in which I purchased a large quantity of land. Hearing some of the settlers speak of the “falls of the Rockwise,” (Iroquois) my curiosity was excited, and I determined to visit them.

So, saddling my Indian pony, I went to Jacob Myers, on the South bank of the Monon. Instructed by him, I found my way to Mr. Donahue’s, a trapper, who lived on the line of a surveyed road to be opened North from Monticello to the Kankakee. He consented, for a consideration, to guide me to the Falls, lying West of him, and in a region still occupied by many of the Pottowattamie Indians; from which tribe the Government had bought the land, and which, though surveyed, was not yet in market. So, with a fully supply of jerked venison and Donahue’s bread in our saddle bags, Donahue and I started off in the morning of a beautiful early June day. I have a vivid memory of my experience in the swampy region through which we first traveled. I was young and thought I knew something, but not of swamps as I soon found out. Donahue said to me, after an accident, “Never mind, you’ll learn! but let your pony take his way until you do.” I did, and learned. Donahue first guided me to a spring, a famous one he said, and where some day he hoped to have a farm. He realized his hope. The farm belongs now, or did, I think, to Mr. McCoy. From this place, he led me to another spring, which afterward with the farm annexed with it, became the property of Mr. Ivers. By this time I had forgotten the swamps. The country showed itself a marvel of beauty. Words cannot describe it. Donahue pointed out to me the works of the river and the timber they enclosed, with the general course of the stream to our point of destination, the Rapids. It was late in the afternoon when we caught sight of the river. Quickly speeding to it, I crossed its bed to the spot on its north bluff where stood the “Sentinel Tree”, the point of observation from which the Indians could overlook the surrounding country. It was situated on the bank of the stream a short distance above where Washington street now crosses. I was here amazed at the beauty of everything around me. No present inhabitant of the town can conceive its character, as I then saw its site. Most of the original town was covered with a magnificent grove of oaks, clear of all underbrush. No English park, as I have seen them, could equal this one, of Nature’s formation. They are all gone. The last one unfelled, was situated on the corner of Susan and Front Streets, on a lot which, to my very great regret since I sold to Mr. Tharp. I rode through these oaks to the prairie north of town, and back to the river. Instantly the thought possessed me. Here must be the home, in future days, of a prosperous and refined community. You, Mr. Editor, well know now, how this thought of those days has been realized in these.

We passed two days there. Donahue and myself, ranging the country in every direction for the survey stakes, in search of township and section numbers; for I had at once decided to buy the property, at the earliest possible moment. Not a stake was to be found. I traveled many times up and down the rapids fixing in my mind the peculiar eccentricity of the river’s flow, at this place. Not a house was there; not a white person did we meet, then, or at any other time, during our four days at sence. There was a band of Indians there fishing and curing fish. I was struck with their manner of fishing. They entered the water, a torch in their left hands, of course at night, and a paddle in their right hands, held cross wise. With the sharp edge of the paddles they struck the fish on their head, thus stunning them, after which other Indians would pick them up, as they turned on their backs. Wishing to learn something more of this mode of fishing, I essayed the thing myself. The rapids were covered with fish. The Indians looked on gravely until I was in mid-stream and commenced striking. From every direction darted the fish against my bare legs. I was very soon out of the water. Indian humor is very practical. I seem to hear Donahue’s laugher.

We returned by way of the forks to our starting point. I went at once to my Father, at Lafayette. Soon we had purchased two floats, and reported ourselves at the land office, at LaPorte, to locate there. We found that the middle one, as it turned out, of the three eighties, including the falls, had been located by other parties, who were there with their friends watching our proceedings. The maps produced, we remarked the singular conformation of the river at the rapids, traced thereon, and were lucky enough in our choice of 80’s the upper and lower 80’s covering the Falls. The owner of the other eighty capitulated, and we bought their 80 for $2000 cash. Soon, on June 14th, 1836, the title to the falls was in my Father. The parties conveying the 80 to him were Joseph Dunham, William M. Kenton, William and Winrod Worden. So much for the way and time my father got this, then, unoccupied land.

I returned to the falls alone on the 18th of the following July. I found there a log house, which had been put up a short time before by Joseph B. Yeoman, on what is now the Southwest corner of Washington and Front streets. It was subsequently enlarged by my father and afterwards, for some time occupied by my brother-in-law, Mr. Henry Weston, the donor, to the town of Rensselaer, of the Weston Cemetery. Mr. Yeoman was absent at the time of my arrival, leaving in charge of the house Mrs. Yeoman, with two children. She kindly gave me hospitality for two days. She told me about their coming and building. I told her they should not be disturbed in the use of the property we had bought, until it was needed for future use; which was not until my father’s arrival there, on the 7th of July, 1838; when he became a resident of the place. I determined to lay out a town. Mr. Yeoman could not have lost anything by the Dunbham-Kenton float; for that float did not cover the ground he built on; nor yet the farm attributed to him. His house was not built until after the acquisition of the land, on which it was built, by my father.

Immediately on my father’s arrival he proceeded to the execution of his projects: The building of a dam and sawmill, with connecting race. I will not give here a history of the difficulties he encountered in this work which were immense, at that early day; nor yet of his expenditures for these works, and for the grist mill, which were very great, and without which the country would not have progressed as it did. If I live to the fiftieth anniversary of the founding of the town, I shall hope to be then at Renssealaer, to witness the prosperity my father predicted for the town, and country, and perhaps with the kind permission of its citizens, to say a few words of congratulation about it; and pay a merited tribute to the character and enterprise of its founder.

My father laid out the town, as stated in the article lluded to. I give here the names of the purchasers ar the price of the lots first sold by him:

And some twenty others at similar, or lower prices Mr. Weston and wife came in the fall of 1838 and occupied the “Yeoman House” which was paid for Mr. Yeoman, and enlarged for their occupancy by my father. Their roof being blown off one night, they took shelter with Mr. and Mrs. George W. Spitler, till ther home was repaired. The courthouse was built by 0liver Hammond. In the spring of 1840, my father’s family arrived. Up to the summer of 1838 the place was known as the “Falls of the Iroquois, Fez Post office Newton County, Indiana”. Mr. Yeoman was the postmaster. From 1840 till the spring of the year 1847 I visited them every year, knew all their doings. It was to them the Presbyterian church owed its origin and establishment. I have letters from its Pastors, most particularly from the Rev.’s Thomas Chestlut and Ezra Wright, on the subject.

My father died in the spring of 1847, after a life good works, in the town he founded. The family left Rensselaer in the following early summer, under no escort, to my home in New York. The evening before their departure they were the recipients of the most kindly hospitalities of that lately deceased lady, harbored and beloved of all who knew her, Mrs. George I Spitler.

I hope you will find room in your paper for this reference to my father’s life in Rensselaer. The whole history of that life and that of his family there I have written for future use. Since his death I have tried, as representing him, to fulfill my duty to the town he found as I know he would have better done, could he would happily been in my place.