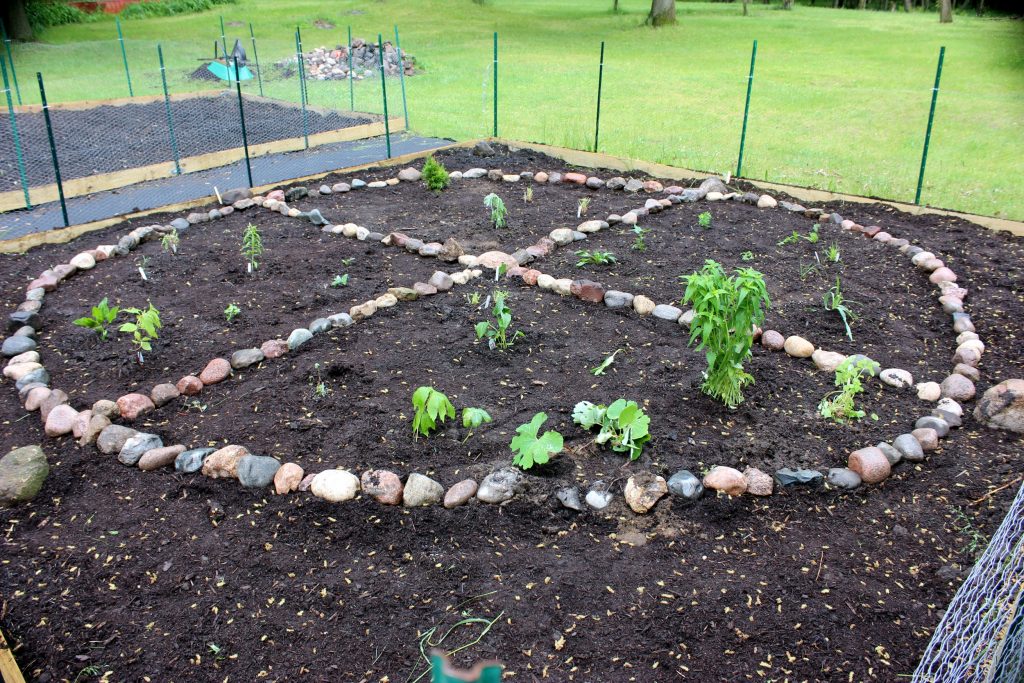 With rocks placed to mark the four directions, Cindy Deardorff stood by a fifth rock in the center.

With a handful of items in her hand, she leaned over to bless what would soon become a Native American Medicine Wheel garden at Collier Lodge outside of Kouts.

“I’m blessing the garden with sage, tobacco and sweet grass. These are the three ceremonial herbs,” she said Saturday as she led a small group of volunteers in planting that garden and another called Three Sisters, also in a raised bed.

“This is done to dedicate to the native people who walked the spot before us and to pioneers who saw the use in this land. We now know we shouldn’t have drained the marsh. Now we’re going to restore the marsh for future generations,” she said.

“This blessing is for those here and all those who come and see it.”
With that, Deardoff went to each of the directional markers and blessed them individually, coming to the rock for the east last, the one she said was more important because it represents where the sun rises each day.
“Every day we’re going to start anew,” she said. “With that, we’re going to start working.”

And the volunteers did, filling out a circle between the directional markers and attending to other details before they could start planting what Deardorff said were plants used for medicine and collected in the wild, “along the marshes.”

The gardens, said Mary Hodson, who with her husband John founded the Kankakee Valley Historical Society, pay homage to the people who lived along the Kankakee River before us, and will serve as an educational living library as well as a harvesting corridor for wildlife.

“It will be interesting to see how the garden thrives and changes over the years, as the plants let us know their best placement in the circle,” she said.

The gardens, said John Hodson, president of the society, have been in the works for several years and while they were put into place last year, the project never really panned out.

“We learned from last year what we needed to do differently,” Mary Hodson said, and that included using raised beds.

“It was a good start to get us on the path that we needed,” John Hodson said.

The two plots, both 20 feet by 20 feet, will contain plants that were once native to the area. Deardorff, of Kouts, brought along around 40 jars of native seeds she said she’s collected through her travels.

The Three Sisters garden will contain varieties of corn, beans and squash, what she called “the three staples” for food. The Medicine Wheel garden will play host to bloodroot, plantain, bee balm, white sage and other medicinal herbs.

The varietals are all heirloom and some date back to the 1700s, she said.
A tax accountant by trade, Deardorff also is a historical reenactor. During those events, each participant picks a specialty, such as weaving or another trade.