First People of the Kankakee Marsh 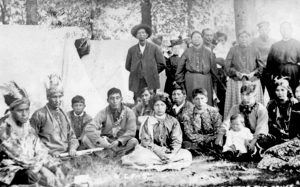 In the 1670s the Miami began migrating from the Fox River area in Wisconsin southeastward towards the St. Joseph-Kankakee Rivers portage. The first recorded encounter, in around 1675, with western man was with French priest Father Allouez.

The Miami were the dominant tribe in the St. Joseph River and Kankakee Marsh area until the Potawatomi took the lead.

The Algonquin Tribe eventually pushed the Iroquois back to New York. The Algonquin then put pressure on the Potawatomi to continue moving south along the western Lake Michigan shore.

France was the dominant European power in the region. Much of our information comes from French records.

Fort St. Joseph was an important military, church and trading installation. Father Allouez (1622-1689) was a Jesuit explorer that established the Mission de Saint-Joseph in the 1680s. The French later built a fort there in 1691. The former mission and trading post now became an important French stronghold. It was located near present day Niles, Michigan and controlled southwest Michigan and the entire Kankakee Marsh region.

England took possession of France’s New World holdings after their defeat in the French-Indian Wars (1754-1763). English trappers and settlers began to move into the Kankakee Marsh area and later Americans came after England’s defeat in the Revolutionary War.

Although, the English were required to leave the Northwest Territories, they continued to keep a military presence and instigated conflict between the Indians and Americans. There were many skirmishes between American and English paramilitary. Both sides used the Indians as pawns.

After England’s defeat in the War of 1812 a peace-of-sorts came to the Kankakee. However, America was expanding west and the Indians were seen as a nuisance, slowing its growth.

Treaties were signed between the United States and the Indian tribes. In 1838 the last of the Indians were to be removed west of the Mississippi. The Indian removal is a blemish on our country that I will address further in future columns.