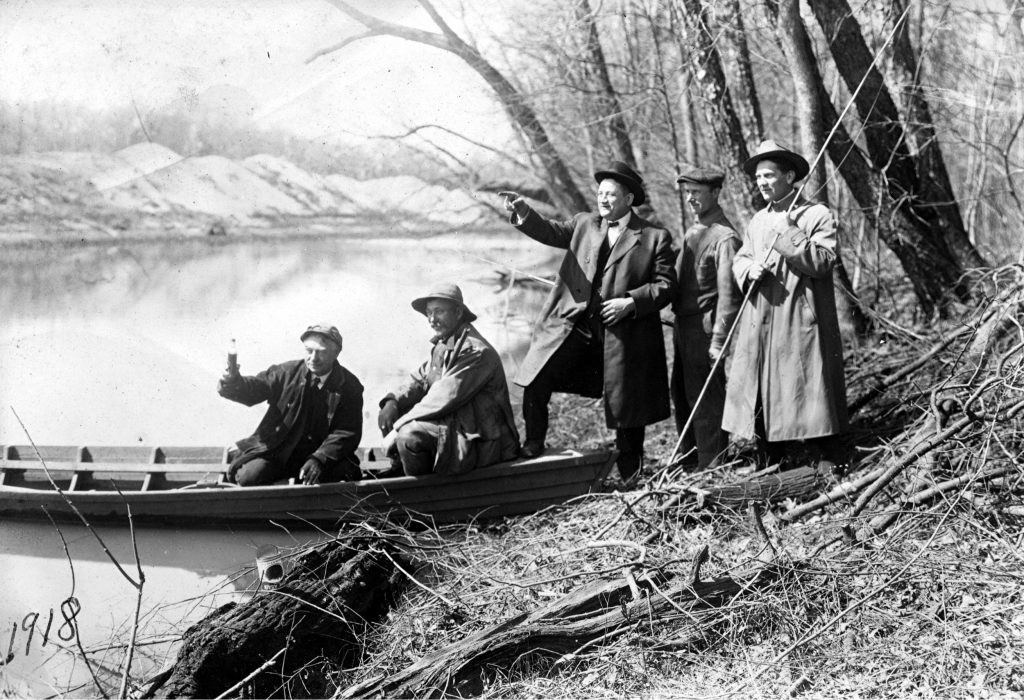 Mourning the death of the Kankakee River near Baum’s Bridge

The Kankakee River has justly been called “The River of History” and in very large part of that history developed in Porter County.  It was about 60 years ago second set of plans were drawn to drain the Kankakee swamps.  The first had been in 1852 and resulted in the theft of great deposits of public funds, an event called “the Swamp Land Swindle.” 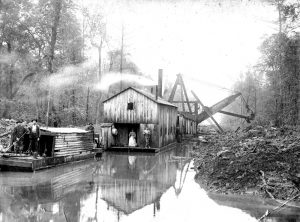 The draining of the marshlands and the straightening of the crooked, wondering river had been restored to the state’s reclamation program about 1900, but continual and vehement opposition on the part of the trappers and hunters, the city sportsman and the clubhouse owners prevented the inauguration of the program, until, in the course of time the voting strength of the draining advocates was sufficiently greater than that of the opposition.

As a part of the opposition certain newspapers reviewed the old scandal, and anticipated it would recur.

It was in 1852 that officials, landowners, speculators, and plain ordinary crooks joined their muddy hands to dishonestly deplete the state’s entire reclamation fund.  And they did it so smoothly that $700,000 was stolen, and although the perpetrators were eventually discovered, not a cent of the money was recovered.

The Goodspeed History of Porter County says: The original scheme is for the government to give the state title to all marshlands.  The state was required to reclaim them, and sell them, and the money to go to the school funds in the various counties.  The arrangement was that that areas of high land within the boundaries of the marshes would be sold to farmers and that money could be used to drain and reclaim the land.

Crooks bought up the highlands at $1.25 an acre, after having them declared swamps so the state had no income to apply on the drainage cost, but it had something over $700,000 in its reclamation fund.

Contracts were let to numerous contractors to build ditches, but the so-called contractors only dragged a hoe line across the marshes and certified, with the aid of county officials, that they had built a ditch.

For these fake ditches the ignorant state officials, some of whom were in on the deal, spent all its reclamation fund, and didn’t get a single decent ditch.

This Swamp Land Swindle was blazoned across the pages of newspapers all over the nation, and the State of Indiana even published a booklet, naming names, and stating amounts.  These booklets are very scarce, for the crooked officials got hold of them first, but enough were circulated to expose the deal and its perpetrators, and copies are still available in some libraries. 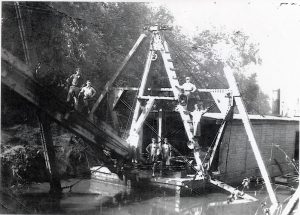 All this unsavory history was reviewed in 1906, when after 54 years the state again had a reclamation fund, and planned again to drain the Kankakee Swamps.  The opponents said more crookedness would prevail.

One ditch in Porter County called the Breyfogle Ditch was dug at the cost of four cents a cubic foot, and the same county surveyor who had contracted for that ditch immediately contracted a ten cent per cubic foot “cleaning cost,” on a ditch that he had promised was sloped enough to be self-cleaning.  The Vidette devoted columns to that affair.

When W E Pinney got interested.  With the delegation he made a boat trip 34 miles up and down the river.  It took two steam launches and 10 rowboats, and upon receiving this delegation’s report the government finally agreed to again aid Porter County and the adjacent counties with funds.

Many landowners along the river refused to submit to the ditch assessments, so they sold out and left.  However there were many farsighted individuals who were willing to buy their holdings.  Pinney bought every acre his purse could stand, and so did others.

There were dozens of legal obstacles put in the way of the project.  It was mentioned in the papers as the most bitterly contested, viciously fought battle of the century.  Wealthy sportsmen poured money into the opposition fund, but when it got to the Supreme Court it was found that about 40 selfish individuals were opposing over 300 agriculturists, so the decision was in favor of the drainage group.

Soon great dredges and steam shovels came into the valley.  Scrapers and teams, men and machines accumulated along the river.  The great machine mowed down the trees, and the dredges dug a deeper and straighter channel for the river.  Steam shovels disinterred ancient Indian skeletons, and bones are prehistoric animals, and the work went on.

Clubhouses were vacated.  Sportsmen from afar no longer came to hunt along the Kankakee and even the migrating waterfowl found a new flyway.  Twenty or thirty local “pushers” and guides found themselves without an occupation, so that finally took jobs with the drainage contractors.  The river of history had become a straight ditch that carried the water and a direct route to the Des Plaines River.  The waterway that had once seen the Indian canoes, the trappers dugouts, and the great fur boats take millions of dollars worth of furs from the Kankakee Valley, was now a deep narrow ditch between two high banks, speeding from the South Bend portage to the Wilmington junction without a sign that Marquette and La Salle had once traveled its old route.

But according to the state treasurer’s report, since that great drainage project was completed, over $900,000 in taxes have come into the Indiana treasury that would otherwise have not been paid.  Over 300,000 acres of one-time worthless land has been lifted out of the mud.  Hundreds of farmers have found new homes along the new river and the incidence of tuberculosis, malaria, aqua, and swamp fever has dwindled to an insufficient figure.

The state reclamation service said: “Draining the Kankakee Swamp lands was the most profitable thing ever undertaken by the commission, and every man who own land along the river, and paid the drainage assessment, suddenly found his wealth far more than double.”

Just to the nation’s “Battle of the Timbermen, and the “War with the Copper Interests,” and the “Tennessee Valley Authority,” and many other once opposed projects were at one time the subjects of several “Best Sellers” there probably will some day be an author who will write an equally truthful book, in an equally sensational manner to be called the, “Battle of the Kankakee Swamps.”