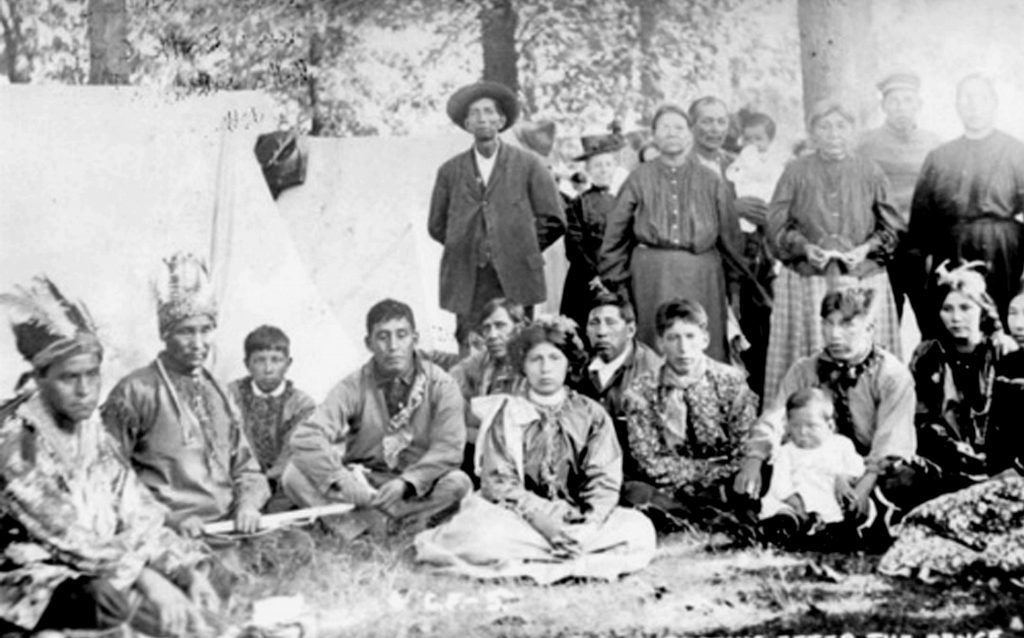 The Old Timer, who lives in a neighborhood that once was part of the land homesteaded by pioneer John Driscoll, sometimes finds arrowheads in his yard and always wonders how long ago it was since someone else had touched the carved stones. Was it a hundred years or a thousand years? Did that arrow help win a battle? Did it keep a family from starving?

The many artifacts found in the Three Creeks area gave proof that Indians roamed this land before the pioneers arrived in the 1830’s. Most of the territory of Indiana was held by Indians known as the Miami Confederacy, with the Potawatomi holding the northwestern part of the state, including Lake County.

In the 1800’s the French explorers penetrated the wild country of Indiana and came in contact with the scattered tribes who, for centuries, had held undisputed possession of the whole Northwest.

By the treaty of 1832, the Potawatomi had disposed of their lands to the government; but they were still on their hunting and trapping grounds in considerable numbers when the first pioneers arrived.

Most of the Indians were friendly, with only a few clashes with their new neighbors. Two large camps were known to be within what is now the Town of Lowell, one near Liberty Park and the other just south of Lincoln St. But the Kankakee Marshlands were the favorite hunting and trapping places for the tribes.

The area now called Merrillville was a large Indian village, then called Wiggins Points. It was said that sixteen trails led to that busy camp. Many artifacts have also been found in West Creek Twp., as well as Eagle Creek Twp., which bordered old Indian Town, now Hebron.

Where Did They Go?

Joseph Nocktonick, Indian historian and educator, furnished an abundance of reliable information concerning the Potawatomi Indians. He had a fair education, a flair for writing, and because he was related to many of the most prominent Indian families, was well qualified.

He was born in Shawnee County, Kan., in 1864, where he attended the district schools and served as educational director and Justice of the Peace of Jackson County, Kan. His second cousin was Saugnash (Billie Caldwell) of Ft. Dearborn fame; his mother, Psettah, who was probably born in Lake County, was a niece of Chief Leopold Pokagon; and his father was a grandnephew of Topenebee, principal chief of the Potawatomi.

Nocktonick wrote the following: “I will proceed with the Potawatomies as I got it from Jacob Massquass, spiritual adviser of the Prairie Band, who was born near the Pawpaw Grove in 1820 [died about 1924].
“After the treaties of 1832 and 1833, the Potawatomies were divided into three principal bands: The Prairie Band, under Waubonsie; the Michigan, under Pokagon; and the Wabash, under Topenebee. The band under Topenebee settled in Southern Michigan, while those under Topenebee and Waubonsie made their way to the Mississippi River. Later, a number of them located on a tract of land which is a part of Jackson County, Kan. Many of the Prairie and Wabash bands died of smallpox.

“By treaty, in 1861, 1,400 under Waubesai, their newly elected chief, became citizens, took allotments and drew the principal funds from the United States Government. They occupied a tract of land 11 by eleven miles near Holton, Kan. After the big payment, many of the Indians were dissatisfied with the treaty, went to Mexico, but later returned, some to Kansas, others to Michigan, Wisconsin, and the Wabash. In the 1870’s rum and smallpox claimed many hundred souls.

“In another treaty in 1872, Mazhee, Topenebee and Meyanco chiefs bought a tract of land 30-by-30 miles in Indian Territory. They are today [1924] without a reservation gone to the four winds. The body of Chief Topenebee now lies near South Bend.

“In 1861 the Potawatomies of the Prairie under Wopsey and Chief Chalkduk, speaker of the band, decided to hold their share of land and money in common. After the death of Wopsey, Shoughnissee became chief. Under the Dawes Act, they took their allotments and are now living peacefully. Their chief, Shoughnissee, died in 1900. They are today [1924] without a chief.” [Negwetch (Thanks), red brother.] 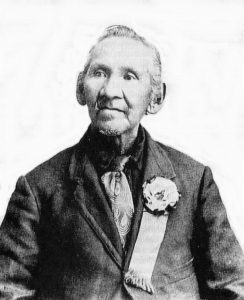 Guessing the time to be about the 1870’s, a well-educated Indian came to Lake County about twice each year to visit the graves of his ancestors. He was Simon Pokagon, chief of the tribe which long occupied the region around the southern and eastern shores of Lake Michigan. His father, Leopold Pokagon, ruled over his tribe for 43 years, and it was his father who in 1833 sold to the United States one million acres of land at three cents (3¢) an acre. On that land so conveyed has since been built the city of Chicago, Ill.

His father died in 1840 in Cass County, Mich. Upon the death of his father, at 10 years of age Simon became the chief of the tribe. At the age of 14 he began to study English, which he successfully mastered. Possibly no full-blooded Indian ever acquired a more thorough knowledge of the English language.

In 1897 Simon Pokagon wrote an article for a New York magazine on the “Future of the Red Man” in which he said, “Often, in the stillness of the night, when all nature seems asleep about me, there comes a gentle rapping at the door of my heart. I open it, and a voice inquires, ‘Pokagon, what of your people?

What will be their future?’ My answer is mortal man has not the power to draw aside the veil of unborn time to tell the future of his race. That gift belongs to the Divine alone. But it is given to him to judge closely the future by the present and the past.”

Simon, chief of the Potawatomi, told a member of a pioneer family in 1873 that he was on his last trip to visit the graves of his ancestors in Lake County. With tears running down his cheeks, he told of how the “pale faces” were plowing over and digging up their dear ones and scattering the bones.