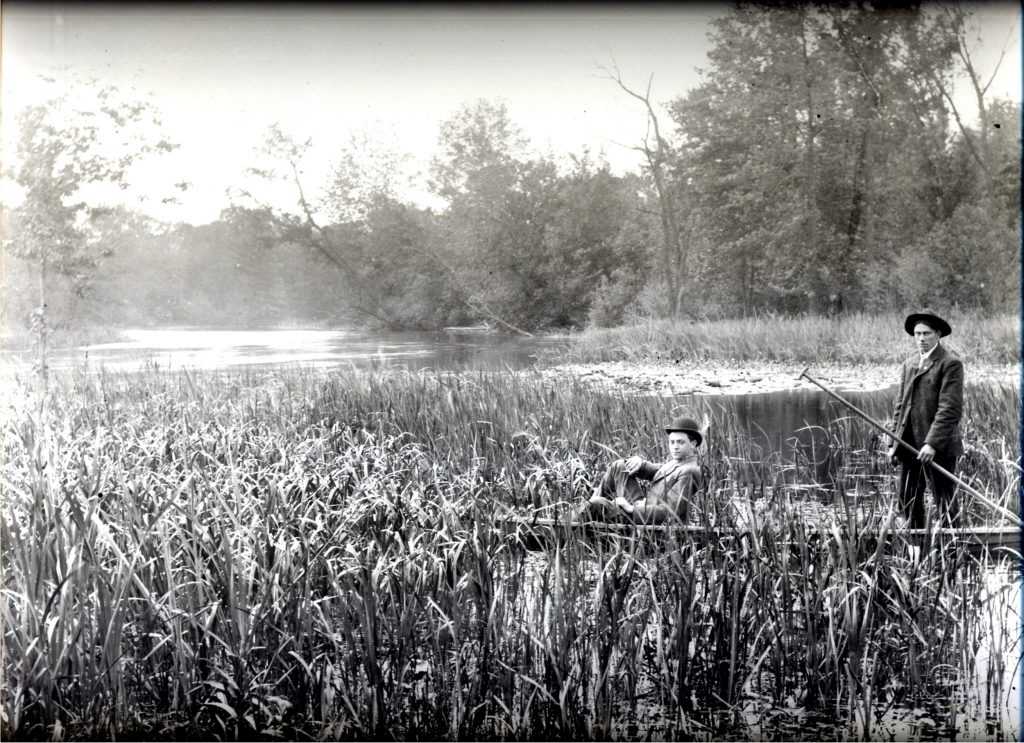 A rapid river winding through

A hundred miles of swamp and slough

From the summer’s rains and winter’s snow.

Rising, spreading as it pressed

Ever onward toward the west,

Rising o’er its banks of sand

And flooding all its bottom land.

A hundred miles of swamp and slough

Where timber in the water grew,

Where oaks and elms and maples spread

To where some hidden island lay;

And bayous showed where long ago

The ancient river used to flow.

Then this wild primeval land,

Was yet unchanged by human hand;

And was the greatest spot for game

Ever known since white men came.

Upon Its ridges roamed the deer,

That made their home there all the year

While many of its hollow trees,

Near Its swiftly flowing water,

Lived the mink and coon and otter

Beneath its waving pickerel grass

Swam the pike and gamey bass.

Wide marshes lay on either side,

Filled with water from its tide.

And there the muskrats lived and bred.

And the mallard ducks and wild geese fed.

Snipe and plover by the scores

Were found along their boggy shores,

And near by these the prairie hen

Hatched and reared her chickens then.

Such was this country In that day,

When nature had her own wild way

A land of fish and fur and game,

Well suited to its Indian name.

Even when locked in snow and ice,

It was a sportsman’s paradise.

Then deer were hunted in the snow,

Or coon were treed and then laid low.

But when the south wind came to stay

And melt the snow and ice away,

Then a transformation came

That filled its valley full of game.

Who can forget that thrilling sight,

Their flying squadrons hid the sky.

Returning to their native land

Ducks and geese, and brant and crane,

All happy to eat at home again.

Their constant clamor filled the air,

Their flocks were encircling everywhere.

And the booming of the hunters’ gun

Was heard again from sun to sun.

But the dredge has done its deadly work,

And left no place for game to lurk

And robbed a million yet unborn

The buck and the doe, and the sotted fawn

That once dwelled in its woods are gone;

The timber in its swamp has died,

Because the water left, it dried.

In vain you listen in the fall,

You never hear the mallards call.

You never see in spring again

The wild geese feeding on the grain

The jacksnipe and the prover too.

Have had their dried up land adieu.

And the prairie grouse is heard no more,

Crowing on the marshy shore.

The tide of time is flowing fast,

Those halcyon days are long since past.

Has robbed us of our native land.

And our old beloved Kankakee,

A dirty ditch shall henceforth be.