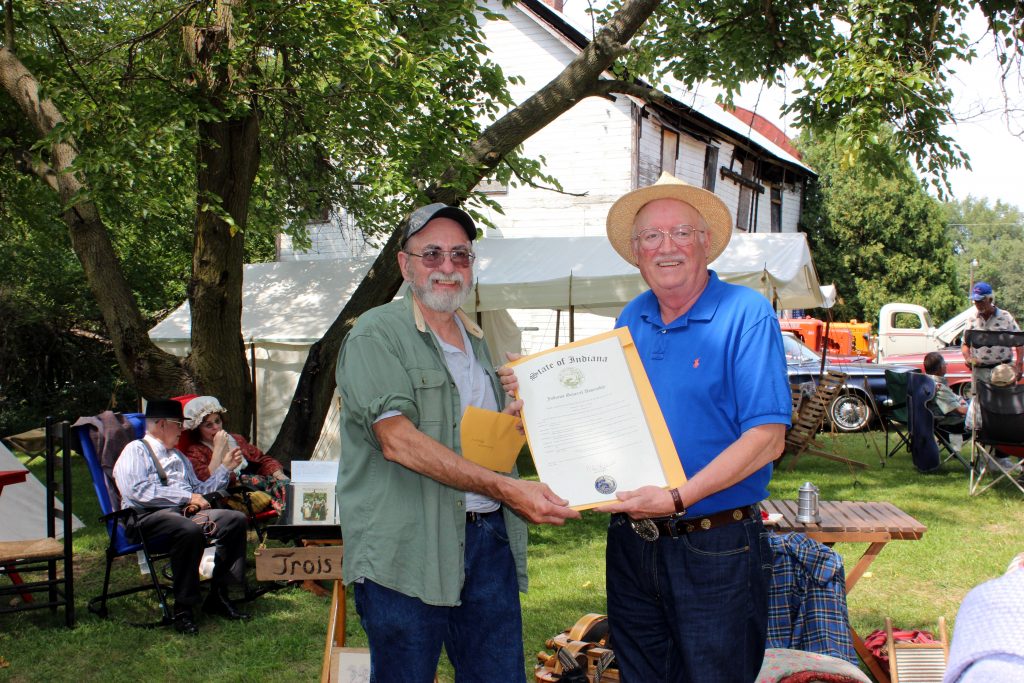 John Hodson said he was “honored” and “impressed” at the Aukiki River Festival on the banks of the Kankakee River on Saturday in Kouts.

Aylesworth read the document — which lauded the festival for allowing visitors to “experience life as it was, with over 350 years of history re-enacted” — in a short ceremony before hundreds attending the festival.

The festival, which continues from 10 a.m. to 4 p.m. Sunday, featured encampments of Native Americans, French voyageurs, fur trappers and traders, and soldiers from the French-Indian, Civil, and Revolutionary wars.

The Collier Lodge — a hunting, fishing and trapping resort in its heyday in the late 19th and early 20th centuries — is owned by the historical society. The group has scheduled the beginning of the lodge’s reconstruction for 2018.

Re-enactor Daniel Vogt, of Sheridan, Illinois, was dressed as a 1770s buckskin tanner.

Vogt demonstrated his trade, as he stripped the hair from a deer skin and softened it into leather for clothing of the time.

“It’s rawhide in your time period,” Vogt said, to a festival visitor. “It’s half-dressed to

Member Gregory Johnston said he and some of his group travel as far as Pennsylvania and Arkansas for old-time shooting events.

“I go anyplace I can shoot,” said Johnston, of Dyer. “Some people like to go golfing — I like to shoot.”

While accepting the General Assembly award, Hodson said the original purpose of the festival was to “get public awareness of south Porter County.”

“We are like the red-headed stepchild,” Hodson said. “All the glory goes to the dunes. We wanted people to also see the beauty of the river.”

Hodson said Pleasant Township, where the Collier Lodge is located, was so named because it was such a pleasurable place to be.

“But whoever named it, it wasn’t during mosquito season,” Hodson said.

Aylesworth said he has long been a fan of south Porter County, and joins with Hodson in honoring the festival and the restoration of the Collier Lodge.

“This area is precious and filled with history,” Aylesworth said. “People don’t understand the breadth and depth of it. Its history needs to be preserved.”