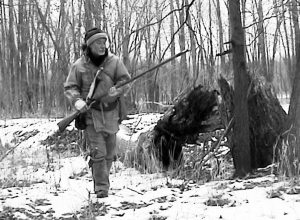 I find very few accounts of early Kankakee River pioneers. That is not the case for Killbuck and LaBonta. Major McFadin wrote: “I will now tell you how Old Killbuck and LaBonta, two old hunters and trappers, left the Rocky Mountains nearly fifty years ago, and came to trap and hunt on the Kankakee. Killbuck was a little dried up man, about 65 years of age, tough as a hickory withe; his name was Bill Williams but the hunters had nicknamed him Killbuck, from the fact of him being such a great hunter, and killed so much game.” McFadin wrote that he first met them in about 1840.

The tales of Killbuck and LaBonta are sketchy at best. McFadin wrote quite a bit about the two, but some details are lacking. He does not state where Killbuck was originally from or how he and LaBonta came to partner up, but introduces them as having “been hunting and trapping in the mountains for many years with varied success, there being many hostile Indians in their vicinity, particularly the Blackfeet, who were a bloodthirsty tribe and were always after the hunters.”

I believe they decided to move on to greener pastures along the Kankakee after one evening when a group of “Indians crept up and fired at them with their bows and arrows, one of which pierced through the fleshy part of the legs of Killbuck and caused him considerable trouble. This arrow had to be taken out with an old bullet mould. Killbuck and his partner raised their guns and fired, killing one Indian and wounding another.” That would be enough for me to look for new hunting grounds! McFadin continues: “They had heard of the Kankakee, even in the mountains. The Pottawatomie used to inhabit and hunt there from time immemorial, but were moved west by the government in 1837, and they carried with them reports of this fine hunting grounds, a place sacred to them as it was here reposed the bones of their ancestors, and where they had trapped and hunted until moved away to a country they knew nothing about.”

The two “arrived on the banks of the Kankakee near where the old hollow tree stands, at Horseshoe Bend, about three miles from Baum’s Bridge.” They found the Kankakee to be “a wild and desolate waste of timber, prairie and groves, with no end of swamps and tall grass, all filled with game. At that time there were no settlers there. There were a few Indians and one or two trappers and fur buyers. They went to work at once to build them a comfortable cabin or wigwam for the winter.”

The first winters after their arrival was some of the harshest of the century with temperatures of 10 – 30 below zero reported. McFadin wrote: “The rivers and swamps froze solid and for three or four months it was almost too cold to hunt, trap or get any kind of game. A great many hunters froze or starved to death, as well as most all the game and fish.” The two anticipated a bad winter and were prepared with food and a tight cabin.

It was written that Killbuck died in 1857 and is buried near where Dunn’s Bridge is now located.