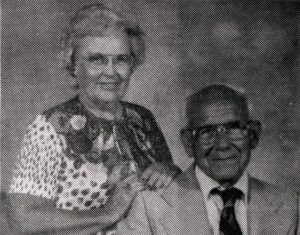 THE SETTLING OF THE GRAND MARSH OF THE KANKAKEE
RIVER

Three years later we moved back to Chicago. We were in Chicago until 1910. Then we moved back to DeMotte. We lived where Frank Hart used to live, right there in town when my father ran the store. He began running the store in 1910. The building was there. It belonged to the Siglers. Later on we sold out the grocery and hardware to Swart. It was where Holley’s Restaurant is (804 S. Halleck). That building burned.

Later on we moved to the center of town. It was where Frank Hart had some buildings there. Konovsky had a meat market down there. There was VanBeek’s. They were more in the center of town. Sam McGinnis had a store where Konovsky’s house was (across the street from Holley’s on Halleck).

I remember when they moved the building from there and it collapsed right out in the middle of the street. It was a grocery store, also VanBeek’s. 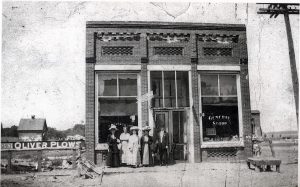 Most of the stores had general merchandise, some dry good and hardware. They had an assortment of things. There were three stores. Not only grocery stores, but they also sold shoes, etc. Doc Wells had an office down there and the post office was there and that was run by the Fairchilds. They had kind of a confectionary store and notions along with the post office. Doc Wells was a older man, a doctor for people. We didn’t have any kind of a hospital.

We went to the two-room, two story school house that was built there. They had two teachers, Mae Fairchild was the primary teacher for the first four grades and Otto Schwanke was the teacher upstairs for the other four grades.

There were several country schools. Everybody walked, no school buses. There was no high school until the brick building. I was one of the first students that went to the high school. there weren’t very many.

Of course, some of the students who were in the second and third years of high school went to Hebron or Shelby. There was a train that went to Shelby. Some of the people here had friends in Hebron or relatives and they stayed there; like Dora Feldman and Emmett Erwin. He graduated high school with my first wife. There were only about three or four in each class.

Bert Llewelyn was a teacher in the high school. We studied history, arithmetic, and algebra. Dora Feldman was a teacher also. We had a lady principal at that time. 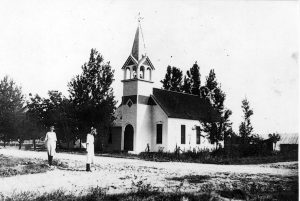 My folks were married here. My father was a deacon in the First Reformed Church (maybe a charter member). Later on, he was an elder.

I remember him going around with a horse and buggy and collecting the dues from the people in the country. I also remember about the preacher having a horse and different farmers would bring him a load of hay or corn or oats. That was part of their contribution to the church. Nobody had much money.

When Mr. and Mrs. Dierteens died (charter members of the First Reformed Church), Dad was on the committee at the church. They (Dierteens) had very little money left. Dad suggested they buy this land for the church cemetery.
(That is the Holland Cemetery).

So, the money that was left after the Dierteens (Thirteen) passed away was used to buy the cemetery. Their gravestones are located on the west side near 950 west.

My parents learned English here in America. We had the Dutch bible; two sermons Sunday in Dutch, one in the morning and one in the afternoon. The young people’s service at night was in English. (1910)

They had the pickle factory and the kraut factory. There were just the three stores that I remember, The VanBeeks, DeKocks and McGinnis’. 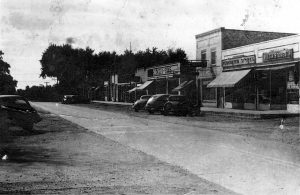 They had hardware separate. At one time my father sold Studebaker wagons and buggies at the grocery store. Most generally he had an order for them. They came from South Bend.They would ship it by train.

Later on after Swart ran the grocery (804 S. Halleck), Art Lageveen and Josie had the dry goods store next to it (Dad kept the dry goods from that). Dad built that building next to Swarts. It had an opening between the two.

The kraut factory had big tanks and they would cut up the cabbage. Then they would tromp it down in there and then the men would have white boots on and tromp it so they could ship it. It went out by train.

The cheese factory was in the south part of town. They would be making the cheese and butter and we kids would go up and drink the buttermilk as it came out of the spout. The farmers went to Cheever’s blacksmith shop to get their machinery repaired. That’s where the horses were shod. It was right there on the corner where Cheever’s garage is now (834 S. Halleck). He lived right across the street. One of his boys, Ivan Cheever was in school just ahead of me. He was trustee at one time. Then they started tinkering with automobiles.

I remember my Dad’s first car was a Ford. They didn’t have any storage batteries or magnetos. You’d get out in the country and it run on some dry cells. They would go dead and they would have to call Cheevers. 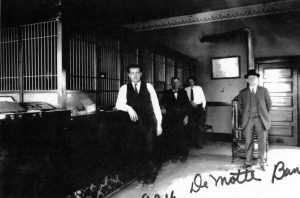 The DeMotte Bank started in 1917 with a few of the local people with a $10,000 capital. And my father was instrumental in getting my uncle John to come down and be the cashier. He spelled his name DeCook. There was John Bunning, Al Konovsky, one of the Hamstras. There might have been a few more. It was not the State Bank then, just DeMotte Bank.

My father was not involved in the bank too long because I think he traded his bank stock to Frank Hart. Frank Hart had the buildings across the street and he sold some machinery. That’s how they got started in the implement business. That was probably in the 1920’s.

Then Frank got to running the bank. My uncle quit and he ran the store in Hebron. My dad got it from Andres Crawford. Frank Hart became to president. The Schultz’s got interested in it and became board members. When they had trouble he bailed them out.

Later on they formed the DeMotte State bank. That’s when Henry Swart got in. He was president. Bill DeCook, my uncle John DeCook’s son worked there as a teller but had no interest in the bank. He’s the one that married Alice Bol, Bud Bol’s sister.

The bank was located right where the town hall is now (831 S. Halleck). There wasn’t much money to loan.

Cliff Hanaway ran a livery stable nearby. If they wanted to rent a horse and buggy they could or leave their own horse there overnight.

Charlie Curtin was the railroad agent and lived next to the railroad track (East of the Troxell Hotel, 8th St. S.E.).

There were passenger cars that came through on the train. The Hotel packed lunches for the passengers.

I don’t know what year it started, but my Dad bought the hotel building about 1916 or 1917. Then we moved and lived there. It had several bedrooms, living, dining and a big kitchen. Then he traded that afterwards to Overrockers. They had a farm out there and dad got the farm. They came from Kankakee. The farm was north and east of DeMotte. It was kind of woody.

We lived there about four years. The hotel burned in the 1920’s. We moved from the Troxell Hotel building to the house south of the school (1000 Halleck S.W.). It was a big square house. It had originally been a barn. Al Konovsky built the barn. It had been remodeled before we got there.

Sometimes the road between DeMotte and Hebron was impassable. So we would go around the Old Grade (700W) and come up that way. It was more sandy. North of DeMotte you just couldn’t get through with a horse and buggy. North of the bridge there were some bad roads. You could get mired down.

There were muskrat houses in the marsh and some of the natives would take spears and go ramming in the muskrat houses to get them. They could tell when they got one on their spear. They sold the hides and shipped them to Chicago.

I can remember when they used to ship barrels of ducks and some of them even shipped bags of frogs to the Chicago market. Some people made a living doing just that. Fish and wild ducks were plentiful. We never went hunting but I remember the ducks.

Konovsky had an ice house and the farmers would saw the ice. It would be 16 and 18 inches thick out there in the marsh and in some of those ditches. They would haul them in and pack them with sawdust. It was a regular big ice house. That was all the refrigeration anybody had.

That ice would keep all summer. It would last until the next fall. Now it never freezes that hard. You only get a few inches of ice. People would come and buy the ice.

The groceries would come in to the stores by rail. Everybody would go to the depot to pick up their groceries. Of course they didn’t have that many groceries. We had cans. One interesting story—I think one of the old time grocery store owners told me that before they had paper bags they would take a sheet of paper and they had a scoop on the scale and they would pour in whatever they wanted into this paper. Then they would fold it and tie it. Then they would do away with the paper bag.

The bridge over the Kankakee River: They came with a big dredge and they would put the framework together. They shipped it all in by train. When they built the first bridge I was just a young boy. It had planks at the bottom.

There was an undercurrent in the Kankakee River and when I was swimming someone grabbed me and pulled me out. It was scary. I was in my teens then.

The Methodist Church was first where the fire station is now (1000 Halleck St. S.W.). It was held together with a few of the faithful women around there. They had mostly student ministers. They would stay a year or so. It was started in 1886. It was a small white church. Later it was moved where the Nazarene Church is now (619 Azalea St. S.E.). 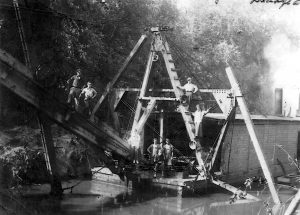 After the river was straightened the Land Company brought people from Illinois and around different farm country ands sold them the land down there. Of course they didn’t know it was flooded land. Some of them paid a big price for that land and lost it.

The Evans’ are still around; some of them went back to Illinois. Emily Evans and her son Dick are still around. She lives where the Ranch Headquarters used to be. They fed cattle out there. 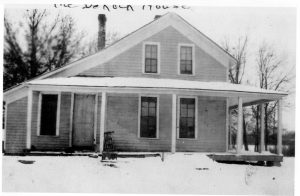 This is the conclusion of the interview with John DeKock.