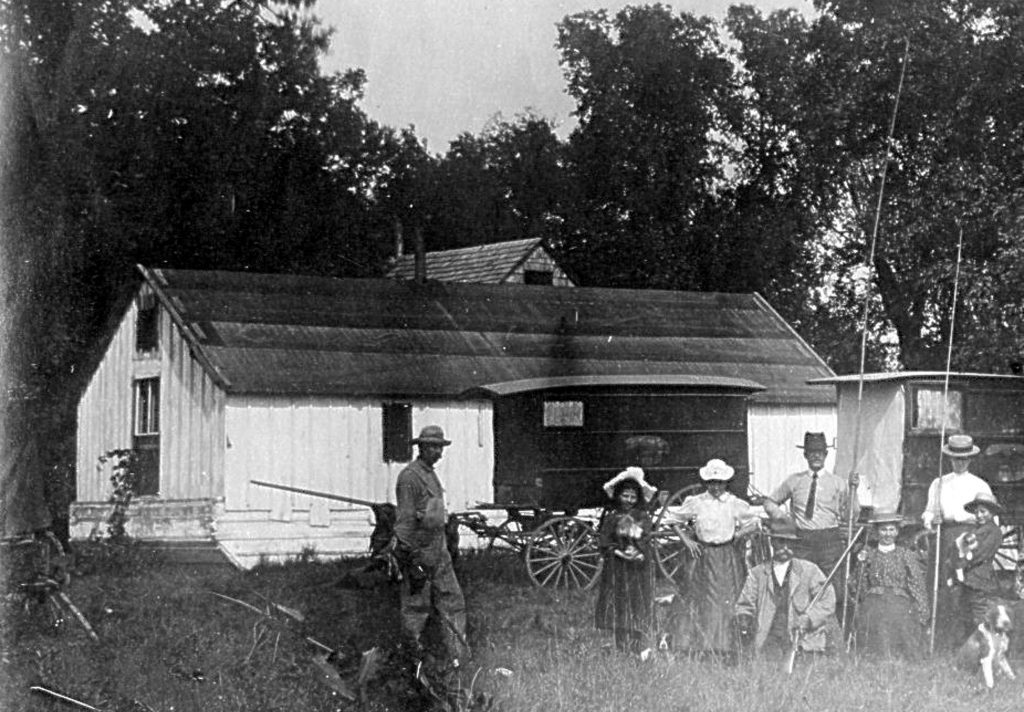 The Hall Family and the Kankakee River

The interesting story that follows was written by James K. “Kris” Hall as related to him by his grandfather, Millard Fillmore Hall, Sr., and indirectly by Millard’s sister, Dora Hall Tolin, through her daughter Shirley Tolin Goddard.

The old Kankakee River was still making many twists and turns when their story took place, many years before the decision was made to straighten the stream, taking eighty miles of crooks and bends away on the southern boundaries of Lake and Porter Counties.

THE HALL FAMILY MOVES TO SHELBY

“In 1899/1900 there was a dredge running along the Kankakee River near Willville, Ind. They had built an oversized barge to follow behind the dredge and carry coal for fuel. It could carry 40 tons, the amount that the average railroad car would then hold.

“In the summer of 1900 my great grandfather, James Hall, heard that the dredge job was completed and went to see what was to be done with the barge. When he returned to San Pierre [where they lived at the time], he and his eldest son, Elmer, were pushing the barge with long wooden poles. They pushed it about five miles from the old Wambo Bridge to just outside of San Pierre.”

James had worked the summers of 1898, 1899, and 1900 stacking hay on the Brown Ranch near Shelby, and it was his intention to move his family to that vicinity. In fall of 1900 he hired a horse and wagon to move the household goods the couple of miles to the barge on the river.

The barge was 34 feet long, 14 feet wide and about two feet deep. It had a floor about 14 inches above the actual bottom. A new tent of about 10 by 16 feet was purchased to provide shelter for the family on the trip. In those days, a second piece of canvas was used to cover the tent, but James used it at the opposite end of the barge to cover household goods and supplies, so it was very cluttered on board.

There were nine family members who made the trip: great grandfather James and great grandmother Nancy, along with daughters Ella, Daisy, Dora and Hazel, and sons Elmer, Millard and John (who was just a baby). Also, several old hound dogs, a flock of chickens and barrels filled with staples such as flour and apples added to the clutter.

For the most part they just drifted with the current, although James and Elmer did push some with the long poles. They had to be careful because the old winding river bed was often jammed with fallen brush and trees that could tear the tent.

My grandfather’s (Millard) job was to sit at the rear of the barge and throw out the anchor when they were in danger of running into the brush. (The anchor was made from an old hay rake.)

The girls, of course, had a few housekeeping chores to do, and they had to watch the baby (John), but they could spend most of their time fishing or dangling their feet into the water and eating apples from the barrel.

When the “houseboat” reached a point opposite of Kouts they tied up on the river bank for about a week to visit with relatives there. James caught several large catfish and they had a big dinner to entertain the uncles and aunts and cousins who lived there.

When they moved on down the river it was a very slow journey through the cluttered turns and twists, but it was an exceptionally mild fall so it was reasonably comfortable. In late November they finally reached the “3-I” railroad bridge above Shelby. Here they had to stop for the winter because they were driving pilings for a new bridge and there was no room to fit the barge between the old and new pilings. So they pulled barge over to one side of the river and stayed there.

In December it got too cold to live on the barge with only a tent for protection against the elements. James hired a horse and wagon to move the family to Thayer for the winter. Grandfather Millard Hall returned to school at this time, but had to repeat his last grade because he was so late in getting to school that year.

In the late spring of 1901 the new bridge was completed and the old pilings were cut away, leaving room for the barge to pass through. James moved a short way down the river, tied up and set up housekeeping.

He moved the family back into the tents now set up on shore and the family planted a garden. A couple of pleasant months were spent, but just as the first vegetables were ripening the owner of the property appeared and ordered them off the land.

Members of the family would speak of this over 70 years later as one of the most memorable disappointments of their lives. But the owner said move, and move they did.

A proud family, they never attempted to sneak back to reclaim any of their crop. Instead, they moved a short distance down the river to a spot about 100 yards east of the present Isaac Walton clubhouse.

This time James got permission to set up on shore, but now they had to pay a small rent. They made the best of it and even planted again, despite the lateness in the year.

They could not live in the tent when winter came, so James began to build a wooden cabin on the floating barge. He would pole a small boat down the river to cut the logs, and then pole back up the river with Millard hanging on to an axe driven into the floating log.

The logs were pulled to a sawmill that was run by a man named Ahlgrim (as in Ahlgrim’s Park). The cabin was then built from the cut boards and covered with paper to keep out the wind.

The family lived on the floating houseboat for a period of time until it began to leak so badly that it had to be pulled onto the bank, where they lived for several years (at least through 1917), paying five dollars rent annually for the site.

James Hall, always looking for a place with more game and less people, left behind his wife and children and moved to the vicinity of Ft. Meyers, Fla., in 1914. Newspaper reports described him as “That Hermit of Shell Island” when he was found dead in his cabin in 1920.

Nancy Hall, tired of roaming, stayed put and died in her Shelby home in 1945. Her children and grandchildren through the fifth generation attended Shelby Grade School and Lowell High School, and many still live in the area. Millard Hall was featured in a Lowell Tribune story dated July 9, 1975, as he told about the dredging done in the Marvel Power Project on the Kankakee (completed in the early 1920’s). Nancy Hall was the daughter of Richard Cannon, said to be the first school teacher in Lowell.

Millard Hall was also featured in the “Shelby History-News,” bicentennial edition of 1976, by Pat Tilton of Shelby, as he told the story of the dredging of the old river. One of his sons, Claude “Gabby” Hall <hallcla.htm>, now deceased, was a ballplayer, firefighter, World War II veteran, and high school classmate of the Old Timer.

The Shelby Post of the Veterans of Foreign Wars honored him when they named their Post after him.