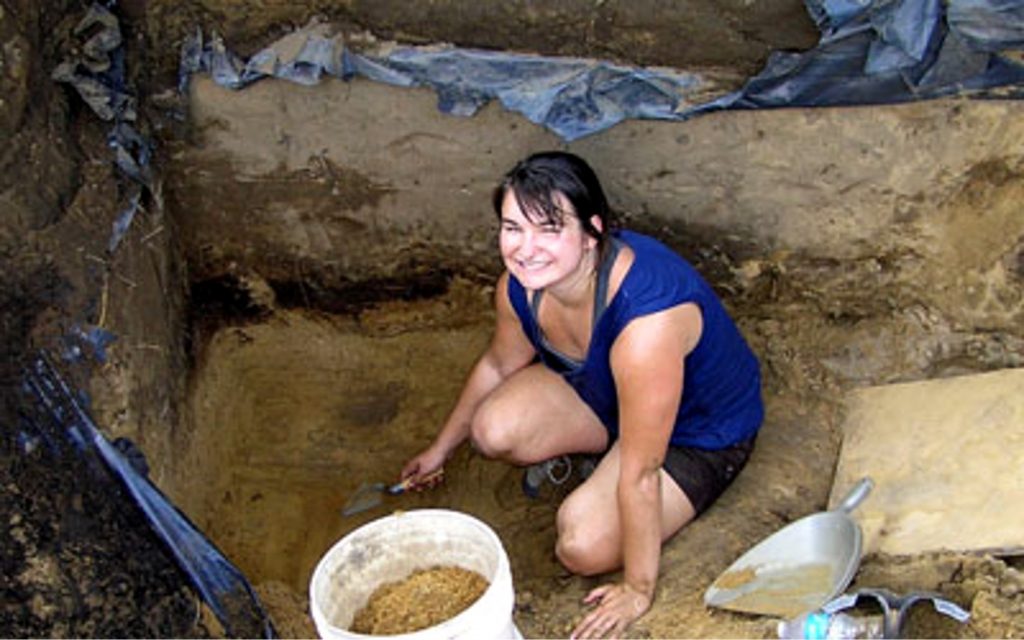 Archaeology at the Collier Lodge site

WHO FIRST INHABITED the Kankakee Valley? It is a matter of opinion and conjecture. However, concrete evidence archeologists have literally “unearthed,” and continue so to do, verify the fact that in this valley, as throughout the old Northwest and on to the Gulf, the first human beings built their strongholds and their burial grounds quite in style with the times. They were huge mounds of earth, varying in size and formation.

With their personal safety from wild animals and neighboring tribes considered, defensive walls, fortifications, lookouts and signal stations were constructed. Certain tribes often carried the dirt for their mounds great distances. This fact is recognized by differences of soil between the mounds and the surrounding earth.

From certain soils they made cooking utensils, and, carrying on contracts with those living in like manner as far south as Mexico, traded implements of peace and war.

They might plant their corn and small grains in the river’s bottom lands during the summer months, but there was no living there when the rains came.

Scientists first considered the Mound Builders a separate race of people. Now it is supposed they were Indians of considerable culture. Their disappearance is mythical, though in all probability they were driven out or exterminated by the uncivilized Eastern tribes. Famine and disease may have been a contributing factor.

One needs but to travel the shore line, tramp corn and wheat fields or follow man-made ditches that flow riverward for further evidence of the early occupancy of a long disappeared race of people. There are mounds here, there and everywhere throughout the Valley. Many have been discovered back some distance from the river in the region of the dune country of Lake Michigan.

None of the mounds in Porter county are of unusual proportions. They range in size from small low tumuli which are scarcely perceptible, to the Wark mound near the southern part of the county. This mound is one hundred feet in diameter. As late as 1931 mounds all over this county were visited and scientifically opened. Little knowledge was gained, however, and after a record was made of location and findings by state archeologists they were again closed.

Many mounds have been leveled off by successive years of cultivation. Others obliterated by soil erosion. Some have been destroyed by the careless hands of amateur collectors. Many that have been opened up have given up potsherds, flint chips, projectile points, copper celts, platform pipes, discoidols, crinoids, effigy pipes and other Indian artifacts.

No doubt many of the mounds along the river were the burial grounds of the Indians who followed these first builders. Placed on sandy knolls above the marshes, evidence of such come to light as farmers plow up arrow points, a human jaw bone, teeth and artifacts.

Many early settlers were ardent collectors, numbering among choice specimens stone axes weighing over six pounds, and miniature ones only two inches long. Arrow heads were selected for their beauty, some made from a variety of agate, others from copper.

It is easy to understand why the aborigines made of this region a choice rendezvous. First, the river was a natural highway. There was an abundance of fish in its stream, and the wildlife abounded in the marshes, thus assuring them plenty of meat with little effort. Climatic conditions, much as they are today, were conducive of settlement. The soil, fertile, light and sandy, was easily cultivated for what little maize and pumpkins they cared to raise. Springs were numerous, making sure of a supply of good water.

Thus the Indian population was heavy. The Potawatomi, last of the various tribes to invade these prairies, probably came about 1725. They were seeking to evade the extreme cold of Wisconsin and Michigan. They helped the first white settlers to make a living in the raw, uncultivated country, and were on a higher level of civilization than the earlier tribes of the Algonquin.

It is thought by those who have covered this region thoroughly and have lived in the bottom lands, their ancestors among the “first in,” that more Indians were buried along the Kankakee from Starke and LaPorte counties down to the Indiana-Illinois line, than there are white people who now fill the cemeteries in the same area.

From the retreats of the invisible, unraveled and incomprehensible, the muffled drums of the warrior echo over the blue-stem of the prairies; the winding sheets flutter uncertainly on the marsh vapors, low-hung and moist. Our footsteps trace an intricate pattern among the unseen crypts of a traditional race. Their warriors are buried on the hilltops, and their “shades” guard the valley from all harm. Their pipes-of-peace, and the flints of their enemies turn in the sand beneath our feet.