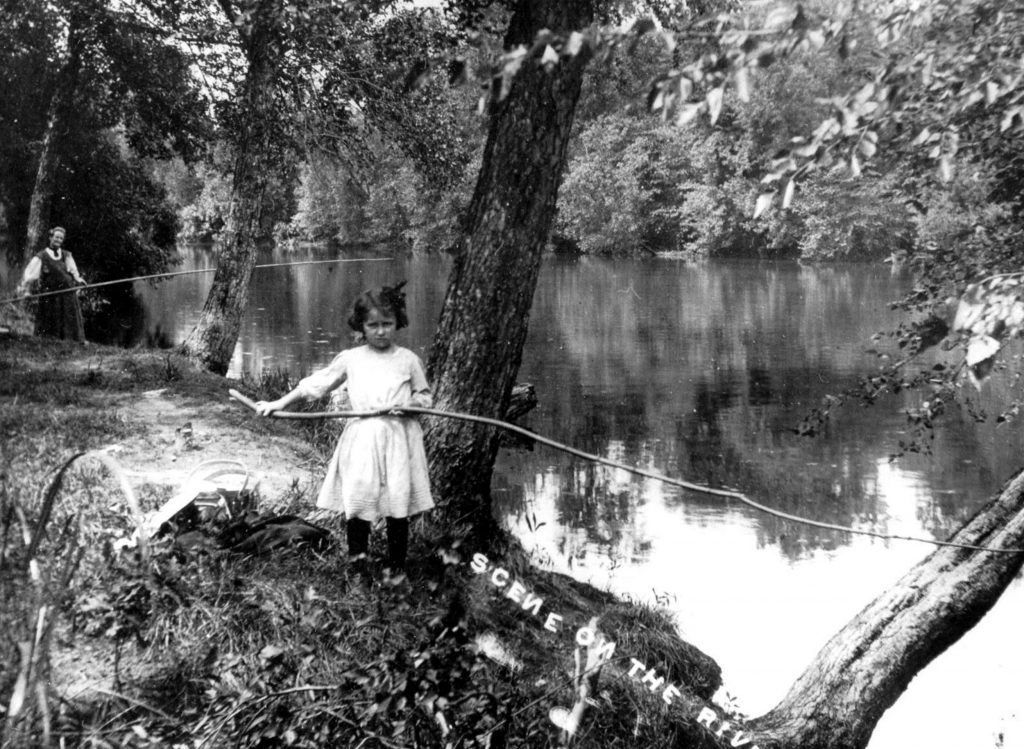 IN NORTHERN INDIANA a miniature stream rises out of a small pond-Mud Lake-near the city of South Bend in St. Joseph county. With magnificent sweeps and bends, it flows south and west to blend its chilled waters with the Great Mississippi and stretch on into the warming sunshine of the Gulf of Mexico. It is the Kankakee: the Potawatomi’s AU-KI-KI (beautiful river).

Surely the Gods of Chance must have patrolled its uncharted shores, pondering its fate. Down its water the dauntless LaSalle and his avant-coureurs paddled their boats winning renown as they carried out the wishes of their king, Louis XIV of France, in his dream for Midas-touched lands -a new and greater empire. They were the first known white men to dip paddle in its current.

Then the territory was the Potawatomi’s, the river their destination after miles of portage from the St. Joseph.

Indiana boasts a dozen main rivers. The Kankakee is one of them. Like many American rivers, it was handed down with an Indian name which changed repeatedly to meet the tongue and imagination of the French explorer and mapmaker, Siegnelay; the Ak-a-ki; Ti-ah-ke-kink; Kien-ki-ki; Au-ki-ki; Theas-ki-ki; Aue-que-que, and Quin-qui-qui. It finally settled for the musical hallmark, Kank-ka-kee.

Paul Dresser fastened a moon over the Wabash that has spread out like the wake of an ocean liner. Tippecanoe and Tyler, too, made honorable mention for the “Shallow, Sparkling Tippecanoe.” Writers have fabricated the “wild beauty of the White Water,” and the “shaded waters of the Mississinewa.” What about the Kankakee? Poets have sung her praises and even Dresser, had he tried, could have caught the gleam of candle-light through the sycamores that crowd her banks.

The glory and fame of the river’s timbered bottom lands -the Grand Marsh-mecca for hunter and trapper for over a century, went to the far corners of the globe. The superabundance of its wild fowl and fur bearing animals and fish was almost unbelievable.

But civilization has claimed its marshlands. The deer, the buffalo, the otter have long since gone. The feathered game in their long flight from northern breeding grounds to the Louisiana bayous have nowhere to rest or feed. The loon’s weird call is only an echo over a vaporous bog.

Reeds rustle along its creeper-mantled banks. Shadows of the mighty hunter stalk its drying marshes. The vines on Grape Island still refuse to beget their kind. They seek to entangle the feet of Humming Bird, the little Indian maiden, and catch the shadows of the Walhonding (white woman) as she awaits the return of her lost lover. 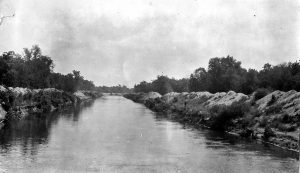 Today the waters of the sinuous Kankakee move swiftly through a legendary land. Its channel remains, except where man-directed dredges have destroyed the natural course, much the same. Its bottom is black sand and muck in the Indiana area. Thus its waters are murky until it reaches a limestone bed after crossing into Illinois territory.

Good swimming coves are few. Deep holes created by swift undercurrents make it a dangerous sport.
The middle of the stream has ever been the only safe course for the boatman. Trees growing close to the soft banks, eventually up-rooted by water-soaked earth, topple over into the river. Their branches catch and entangle the unwary sportsman; their bodies increase the danger of sagged or upset boat or clogged motor, as the tree trunk slowly rots away.

Even after the area was relinquished by the French, it was a long and complicated process that made of the Kankakee the natural dividing line as we know it today. As late as 1922 State legislators were having frequent headaches modifying the existing boundaries of those counties that border on the river conforming to the new channel resulting from extensive drainage operations. Newton, Jasper, Lake and Porter were affected by the Marble, Powers and Williams ditches. LaPorte and Starke had a common water boundary along the Place ditch, and a Senate bill altered the lines of St. Joseph and LaPorte along the river.

Now the Kankakee crosses St. Joseph county, separates LaPorte and Starke; Porter and Jasper; Newton and Lake. Finally vagabonding through some of the richest and most productive agricultural land in the Middle West for nearly two hundred miles, it flows across the Illinois-Indiana state line, joins forces with the Des Plaines a short distance above Morris and forms the Illinois River. In its course it has been strengthened by the Yellow river, a tributory entering at the English Lake region from Starke county and the Iroquois as that stream pours in between Wilmington and the city of Kankakee.

The Kankakee region is one of four mid-country river valleys which form distinct and natural topographical divisions. It sweeps into possession the northern part of Indiana, laying claim to all or parts of twelve counties in its drainage basin; St. Joseph, LaPorte, Kosciusko, Marshall, Starke, Pulaski, Jasper, White, Newton, Benton, Porter and Lake.

The other regions are the Ohio Valley, which lies south and east, embracing that section drained by the tributaries of the Ohio; the White River Valley, extending east and west from Wabash to the Ohio line, covering an area including vast stretches of prairie land between the east forks of the White River and the Wabash, largest of the four divisions. It interlocks the rich, productive White River Valley. 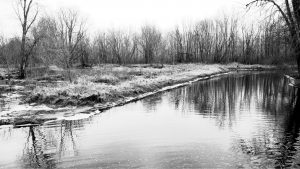 Sixty miles of Lake Michigan shore line with its picturesque sand dunes make definite northern boundary lines. Sixteen thousand square miles of broad fertile fields, timber lands and marshes to the south and west of this shore line comprise the valley. But geographically speaking, this valley is a possession of the great Mississippi Valley, and the Kankakee River is a faithful and obedient child to that Father of Waters.

From the river’s source to the Indiana-Illinois state line, the distance, if a straight line were drawn, is about seventy five miles. But within this distance the stream-before the dredging program took out a few crooks and turns and isolated numerous oxbows-made some two thousand bends as it flowed a total of two hundred and forty miles.

Topographically, the entire area is prevailingly level. Near the state line above Momence, the first limestone outcrop in the river bed occurs. This arch, until broken with the digging of the William’s ditch so prevented the wearing down of the bed that a very large part of the drainage area in Indiana was one vast swamp. There were some five hundred thousand acres of marshland within the Valley of the Kankakee. 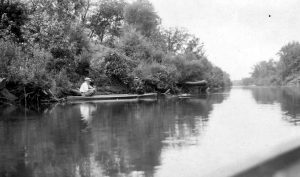 This Grand Marsh, which extended from the English Lake region down to Momence, gave the river its outstanding reputation as a hunter’s paradise. It resembled an immense sponge, slowly absorbing the water during the wet seasons and as slowly giving it off during the dry so that the flow throughout the year was quite regular and uniform in amount. Over thousands of acres the water spread out creating vast sanctuaries for wildlife.

Now, because of the drainage program, the water flows off much sooner after rainfall. The river is higher during spring and fall floods. The soil along the river, a dark sandy loam, is very porous and has the ability to absorb huge quantities of water.

Although the Kankakee is definitely Indiana’s river, Momence and Kankakee City, both old settlements on the Illinois side, are the only cities in the valley the river actually underwrites. At Kankakee, where the banks rise to great heights, the river flows possessively through the city. Lovely old mid-victorian houses set the town part, and many modern dwellings have been built along winding streets that flank the river.
Back in 1818 just two years after Indiana had been recognized for statehood, William Darby was writing: “It may be doubted whether any state of the United States, all things considered, can present more advantages than Indiana.” 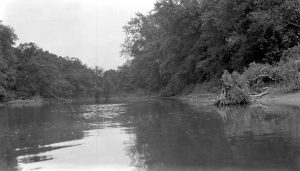 Did he institute Hoosier bragging when he continued, “Intersected or bounded in all directions by navigable rivers or lakes, enjoying a temperate climate, and an immense variety of soil. Near two-thirds of its territorial surface is yet in the hands of the Indians, a temporary evil, that a short time will remedy. When all the extent comprised within the legal limits of this state are brought into a state of improvement, with one extremity upon the Ohio River and the opposite upon Lake Michigan, with intersecting navigable streams, Indiana will be the real link that will unite the southern and northern parts of the United States.”

The Kankakee had, very early, submitted itself as a part in the scheme of all this. While the river was not used for commerce, in its entirety, due to numerous crooks and turns, sand bars, lack of uniformity of depth, miles of broad inaccessible marshes with few approaches, and its limestone outcroppings, the light canoe of the red man and the heavier batteaux of the early trader and settler made regular passage up and down its waters.