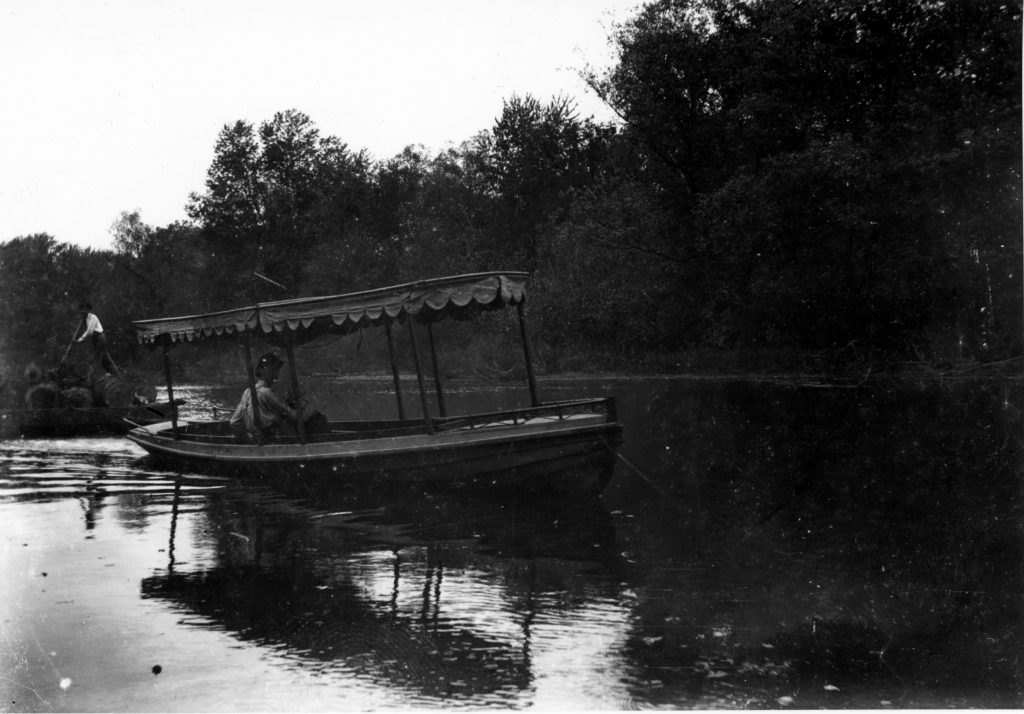 Steamboat on the Kankakee.

In the last story Siftings told you the history of the first steamboat to ride the River Kankakee, as told to us by Dell Kellogg. Well, here is the story of the second steamboat to navigate its waters. 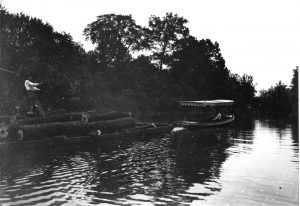 The experience gained from the operation of the first steamboat gave Gordon and Kellogg the idea that the timber from Baum’s Bridge to Hebron ditch could be turned into cash. The plan was to float cordwood from where it was worthless to Momence, Illinois where there was no timber, and there was the market for it. In those days coal was unknown. Then railroad engines were burning wood for fuel.

Gordon built a boat 35 feet long and 9 feet wide, and Dennis Kellogg and his son Dell furnish the engine, boiler and other machinery, which they made in their shop in Valparaiso. Gordon also built two barges to carry the loads of wood. The rigged up a buzz saw, attached to the engine on the boat, with which they sawed the timber into stove wood lenghts. Jerry Sherwood and Hank Rutt, of Hebron, cut the trees down and floated the logs to the river where the saw was. Two barges, each 30 ft. long and 9 foot wide, were loaded with 75 cords of wood each, and started bound for Momence. It was soon discovered that the plan of towing the barges would not work. They want to cut across lots and into the timber. Poles were cut and the barges put ahead of the steamboat, pushing instead of towing. This plan worked. The cargo got to Momence in a day and a half, and ready market was found for the wood.

Jerry Sherwood, an old-time trapper and hunter, who had worked the river from Hebron to Momence, was the pilot. The business ran during the year as long as there was high water. It required an overflow of the marshes where the timber grew to float the logs to the river where the boat was. When the water was low this could not be done. In the low-water season the steamboat was chartered by hunting parties and thus kept fairly well in service. The business prospered in many trips are were to Momence, until the building of the Monon railroad. The company built a low bridge across the Kankakee at Shelby, which stopped navigation.

The elder Kellogg, although he’d proven that the Kankakee River was navigable and could have gone to law with the railroad company, and probably would’ve won his case in court, decided to let the matter go. The boat was used as a hunting boat by hunters a couple years, when the machinery was taken out and brought to Valparaiso. The engine went to the Vidette office. The Talcott’s had changed their old Washington hand press for a Campbell cylinder, and this engine furnished the power. After several years of use the Vidette installed a later and more powerful engine and the old one went into a pleasure steamboat operated by Lew Mandeville, Valparaiso’s old-time photographer, who gave passengers a ride around Flint Lake twice for 10 cents.

From there the engine went to a sawmill owned by Aaron Lytle, located at the foot of Franklin Street and north of the Pennsy railroad. Later it went to the Chesterton Tribune, when that paper gave up its Washington, and installed a Taylor drum cylinder. There it remained on duty until the advant of the gasoline engine, when it was replaced by a Lambert. From the Tribune it went down to Arkansas, where it was put to work by Ed Way, pumping water for the rice fields. This same engine tried to make the first electric light ever shown in Valparaiso, and succeeded for about 60 seconds. This was in 1883. Edison had invented the light bulb and the dynamo to make electric light, and a few cities have plants

George Conover, then the progressive citizen of the town, wanted to install a plant here. He wanted a franchise from the city, and he planned to give the citizens an exhibition of the new fangled light. He went to Charley Talcott, one of the proprietors of the Vidette engine, and asked permission to hook up his dynamo to the Vidette engine, which was a key hero of our story. The same old boiler an eight horsepower upright that had done duty on the river steamboat was doing duty and Vidette plant. It was old and very tired. The building was a residence house converted into a printing office, by knocking out a few partitions. The ceilings were low, and the stack of the boiler extended right into the ceiling. It was considered dangerous to carry more than sixty pounds a steam in the old seive. The engine was rated at five horsepower. The night came for the exhibition.

A wire had been strung from Vidette office, which was located where the White Front garage now is, to the corner of Washington and Lincolnway on the south side of the street. Manning the undertaking were Charlie Talcott Captain; Ben Smith, Pressman; Harry Stewart, devil, and the writer, who is then the reporter. Steam was raised to sixty pounds-not a flicker. 80 pounds-100 pounds, nothing doing. Talcott called for kerosene beryl barrel staves. In those days the grocers bought her kerosene in barrels the staves made a very hot fire.

The guage showed 120. The smokestack turn red, then white-140 pounds showed. Still nothing doing. The engine was dancing on its blocks. And still no light. At last resort Charlie Talcott removed the governors from the engine, and for probably a few seconds, but what seemed hours to us, the light show. How we all escaped being blown to kingdom come that night, I do not know. The spectators ridiculed the contraption and vowed they will stick to their kerosene lamps yet awhile.

But Conover was not licked. The next night he got Albert Zimmerman, the old garage man to pull his 20 horse threshing steam engine to the Keene alley, and he got plenty of light. When I think back of how foolish we were at our attempt to make electric light with the crude power we had, I want to laugh. Ben Smith, Harry Stewart, Albert Zimmerman and I are the four survivors and I know they will vouch to the truth of my story.