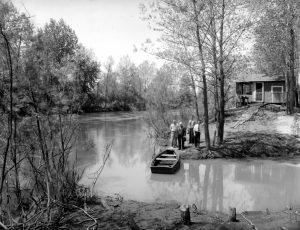 In “Alfred H. Meyer: The Life and Work of a Midwestern Geographer” it is stated that: “Meyer is perhaps most noted for his application of the sequent occupance concept in the historical geography of the Kankakee and Calumet.” I had to look that expression up. The definition of Sequent Occupance is the notion that successive societies leave their cultural imprints on a place, each contributing to the cumulative cultural landscape. Cultural landscape in this context is a geographic area (including both cultural and natural resources and the wildlife or domestic animals therein), associated with a historic event, activity, or person or exhibiting other cultural or aesthetic values. Okay, with that under our belts we can fully understand what Meyer’s “The Kankakee Marsh of Northern Indiana and Illinois” is all about.

When I read Meyer’s paper, I had a hard time understanding the relationship of human history and geology/ecology. Meyer’s Kankakee Marsh paper begins an ecological overview of the marsh and its relationship with man. Meyer wrote the Kankakee is: “Marsh prairies of aquatic sedges and grasses, potential grazing areas; wild-rice sloughs, scenes of countless wild geese and ducks; flag ponds, lined with muskrat houses; a narrow but almost uninterrupted swamp forest, full of game, rimming a meandering river teeming with fish; the wet prairies, made humanly habitable by the interspersion of sandy island oak barrens surmounting the highest flood waters- such in brief is the physical setup which attracted the squatter pioneer from the East, who sought contentment in the solitude and seclusion of a marsh wilderness.”

Meyer interest in the Kankakee began when he started his study in the summer of 1931. He took a survey of one-mile strips three miles apart along the length of the river. The purpose was for the basis of a geographical study for a paper investigating: “concerns contending agricultural and conservational issues involved.” He made his views on conservation clear as a: “partial-marsh restoration enthusiast.”

Meyer identified four stages of settlement of the Kankakee Marsh: (1) The Potawatomi Indian, Fur Trading Stage (up to 1830); (2) The Pioneer Settler, Subsistence Agriculture Stage (1830-1850); (3) The Com Belt Farmer, Commercial Agriculture Stage (1850-1900) and (4) The Agricultural and Industrial Specialization, Conurbation Stage (1900-1953). Another stage that Meyer nestled in his timeframe was the Rancher’s and Recreationalist’s Kankakee (1880-1910).

What many people don’t realize is the amount of cattle ranching activity that took place in the Kankakee River Valley. Chicago meat packer, Nelson Morris, owned 23,000 acres in Jasper County where he fattened up thousands of cattle grazing off the abundant marsh hay of the Kankakee. Many of his cattle were originally shipped in from Texas. Morris led an adventurous and exciting life— including surviving the ill-fated Hindenburg airship fiery crash in 1937.

Another cattle ranch of local interest was the Burke Ranch, which was located southeast of Kouts. In 1887 brothers Jim and John Burke and George Adams purchased 6,000 acres from the Aetna Life Insurance Company. The ranch was named Clanricarde after Jim Burke’s wife’s home town in Wales. The ranch was short-lived and was bankrupt by 1893.

Go here for a in depth definition of “Sequent Occupance.”