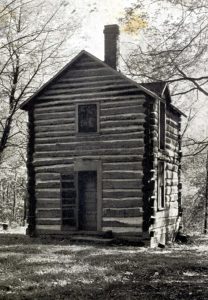 Ours is a nation of immigrants. Peter Linden was one such immigrant. Peter and his wife Mary entered the United States in 1864 and settled in the Baileytown area of northern Porter County. The Lindens entered through Minnesota to Chicago and on to Porter County. The Swedish came to America for religious freedom and employment opportunities. Between 1851 and 1930 1.2 million Swedes migrated to America. An estimated 25% of the Swedish population left Sweden by 1900. By 1900 Chicago had more Swedish residents than Stockholm. At the beginning of the 20th century approximately 44% of all Swedes in Indiana lived in its northwest corner.

Joseph Bailey laid out Baileytown by the 1830s, but it continued to be a rural community. Baileytown was located near and around Joseph Bailey’s home. The Swedes of Baileytown were drawn to the settlement because of its agricultural acreage—­­­once logged off. It is reported that Bailey recruited Swedes to log and work his sawmill. These early Swedish loggers’ reputations were not very flattering. The Augsburg Church was built in 1864, which drew more families to the area. The area retained its Swedish language, religion and customs. By World War I, the Augsburg Church service changed to English from Swedish—but not without struggle.

The Linden home is a distinctive example of folk architecture using unique Swedish cabin construction methods. I would estimate that the Linden Cabin was built between 1865 and1870. The home has been altered over the years. It was originally constructed as a two-room, hall and parlor log cabin and later modified to a L-shaped building with a side gable roof and covered with both lap and asphalt siding.

The Linden cabin was moved twice within the Dunes National Lakeshore and in 2007 it was moved to Countryside Park in Portage, Indiana. Due to lack of restoration funds the cabin was offered to any person or organization that would restore it. The Kankakee Valley Historical Society offered to save it. The Linden Cabin is similar in size as the 1836 Eaton Ferry cabin at Baum’s Bridge. By June of 2013 the cabin was disassembled and moved to the Collier Lodge site at Baum’s Bridge.

Now begins the work of restoring the cabin. KVHS plans to accomplish this through volunteer donated services and monetary contributions. New timbers are needed to replace those lost through deterioration. We are seeking the volunteer services of all classes of tradesmen for this project, especially those with traditional historic home or cabin experience. This is will be a community project requiring the efforts of those interested in preserving our Hoosier pioneer history. I invite you to go to our KVHS website and view our Linden Cabin webpage. Please, contact me with your offer of help with this project.

Much of the material for this column was contributed by the National Parks Service, Judith Collins and Eileen Starr.

Piece by piece, history is being restored along the Kankakee River.
On Saturday, volunteers helped dig 12 4-foot-deep holes, the start of the foundation for the Linden Cabin, which the Kankakee Valley Historical Society acquired through the National Park Service after the cabin made a detour to Countryside Park in Portage for several years.

The cabin, constructed in 1864 by Peter Linden and originally on land that’s now part of the Indiana Dunes National Lakeshore, is similar in size and construction to a ferry cabin that once sat along the banks of the Kankakee River on property now owned by the Kankakee Valley Historical Society off of Baums Bridge Road.

The land also is the site of Collier Lodge, a hunting lodge constructed around 1890 that the society wants to restore. The land has been the site of archaeological digs through the University of Notre Dame for several years.

Paid Posts are created by our advertisers. Our editorial and reporting staffs are are not involved in the creation or production of Paid Posts.

The historical society also got the Linden Cabin at no cost. The cabin was moved to Countryside Park in 2007 but didn’t fit with plans for the park, Hodson said.

“They were looking for someone to take it,” Hodson said, adding the historical society got the cabin about two years ago, which required disassembling it and moving it from Portage to the land along the Kankakee River.

About 60 percent of the cabin’s original timbers are still intact, Hodson said, though some were removed when an addition was put on the cabin. Though the cabin is white pine, the National Park Service said it was OK to use oak trees downed on the historical society’s property by storms a few years ago to make new timbers.

That work has been ongoing. Now that the footings are in, Hodson hopes to have much of the cabin, to just above the doorway, in time for the historical society’s Aukiki River Festival in late August.
“My mission is to get this thing up at no cost, nothing, and so far, it’s worked out that way,” he said, adding volunteers and local businesses have donated time and material to make restoring the cabin a reality. “I don’t really find it that hard. The project sells itself.”

Because of the past archaeological dig and because part of the society’s land is in a 100-year flood plain, Hodson had to work with state and county officials to find the right spot for the cabin.
“It’s just out of the flood plain and just far enough out of the midden (where the archaeological digs occurred) to please them,” he said.

In fact, all of the dirt removed to place the footings for the cabin’s foundation had to be screened for archaeological artifacts, though volunteers didn’t find much.

“I hate to say it, but this is a garbage pit,” said volunteer Perry McLeMore of Hebron, adding he wished he’d found something cool.
Instead, he and other volunteers uncovered a 1950s Heinz ketchup bottle, part of a beer bottle, a chunk of metal, and some metal springs.

Mary Hodson took a look at the findings with some relief, since anything of importance would have required a temporary halt to the work while Mark Schurr, an associate professor of anthropology at Notre Dame who was on call for the day, came out to see what it was.

“We’ll see where history was,” she said. “It’s coming from a concept, and we had that concept, to reality, and that’s what these post holes are.”

Collier Lodge is still a concept, she said, though the society is applying for a $15,000 federal feasibility and planning grant to restore the old lodge.

“That’s OK because to me, we’re still able to create a piece of history while (Collier Lodge) is happening, and it is happening,” she said.
Lavalley is a freelancer.