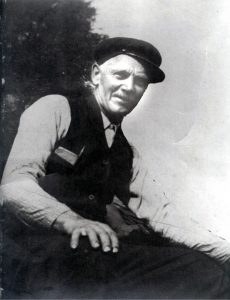 Steamboat Trip on the Kankakee River with Max Ahlgrim

In the year 1875, Christopher Ahlgrim and his wife Mina made plans to settle in Lincoln Twp., Newton County, Ind. They were natives of Chicago, Ill., and their new home was to be on land set aside for school support by the State of Indiana; acres sold for a reasonable price.

Two small carloads of lumber and furniture were to be shipped to Momence, Ill., with plans to haul it through the swamp by horse and wagon to the site of their new home.

Max Ahlgrim, their seventeen-year-old son was sent ahead of the family to oversee the unloading of the lumber and to find a teamster who would risk the hard task of crossing the twenty miles of rough swampland and sand hills where no roads existed.

The enterprising young man heard a rumor of a steamboat on the river, and the possibility of chartering it for the trip up the river. He investigated this story and found the owners of the boat, Mark Atherton and Perry Stratton, both of Momence, who agreed to take the load to Thayer’s Landing, near Shelby.

The steamboat was the “Morning Star.” It towed a large barge, and had been used to haul salt to several landings along the river, for the many herds of cattle, pastured along the valley during the warmer months.

On Saturday afternoon, Aug. 21, 1875, the whistle of the Morning Star was heard, and young Ahlgrim was on board with the load of supplies, watching them cast off for the exciting trip up the river. The steamer made good time against the current, and the young passenger was having the time of his life, as the boat rounded one bend after another, opening up the “grand” view of the beautiful scenery on the Kankakee River.

It was at dusk the same day when a landing was made for the night at “Garden of Eden,” east of Momence.

In his later years, Max Ahlgrim told his story of the trip, and this is what he said about that landing: “Dan Parmalee showed us the Garden, but I did not see Mrs. Eve. He showed us the apple out of which Adam had taken the fatal bite.” (This old timer was surprised to read that the garden was there as early as 1875.)

Max found a short fishing pole aboard the steamer and after digging worms on the bank, caught a fine mess of “goggle eye” and bullheads from over the side of the barge. The fish were cleaned and plans were made for Sunday dinner.

Before leaving the landing, Engineer John Stowell joined their party and Perry Stratton took the wheel. Young Max Ahlgrim moved forward on the steamer and took his position with a single barrel, muzzle-loading shotgun. Soon on Sunday morning the state line was crossed and they entered the Kankakee Valley in Indiana.

Max described it in this way: “While the scenery from Momence up to the state line was grand, all day Sunday up the river a grand and marvelous work of God and nature opened up to man. At nearly every bend some wildlife scampered out. Young mallard ducks hardly able to fly, coots, sandhill cranes, and “thunder-pumpers” (grouse or prairie chicken) by the hundreds scampered out from the underbrush to get out of the way of our disturbance, while many squirrels in the trees barked at us defiantly. We shot several ducks that got in front of our outfit to be used for “Sunday dinner.”

Ready hands were busy keeping up steam while Stowell prepared a bountiful Sunday dinner. The boat was then tied up at a suitable bend where wood for the boiler was available, and busy hands loaded enough fuel for the rest of the day.

On Sunday night, the steamer and barge were tied up at Capt. Sink’s Landing, a mile above Blue Grass Landing, There a large oak tree had fallen across the channel, and again the busy hands chopped wood and cleared the way.

“The most remarkable feature of this trip was that but very seldom along the stream any sign of habitation was seen – no bridges of any kind all the way,” said Max.

Monday morning, Aug. 23, 1875, the crew was under way very early, and arrived at Thayer’s Landing at 11 a.m. After unloading the lumber and furniture, they lost no time turning around and sailing back down stream to Momence, with young Max Ahlgrim left on the bank with the shipment with no houses or human beings in sight, and none to ask directions. Finally, he was directed to the site of the new family home.

In following years, the Morning Star hauled wood for stoves and fence posts, oak lumber from the Bumbaloo saw mill, stone for buildings, and continued to bring salt to the many herds of cattle along the way.

To continue the story Max Ahlgrim told in the 1930’s, he told about the towns and trading points in the Kankakee Valley: “First trading point was where what is now Lake Village, then called “Big Ditch,” where Jim DeWolf and Cye Scott had a little general store about 14 by 16 feet… Bill Kerney had a blacksmith shop and John Stowner was Justice of the Peace. At the store, settlers could get flour, sugar, coffee, tobacco and other little things and pay for them with fence posts — for these four cents apiece was allowed, if good 6-1/2 foot white oak posts.

“DeWolf and Scott also handled mail for the settlers, if desired. Momence, Ill., was the post office. Any reliable party making the trip of twelve miles to Momence would pick up the little sack of accumulated mail at the store, take it to the post office and return with the mail for Big Ditch. The settlers could buy a three-cent stamp with cash or trade a good fence post for a stamp.

“The store also handled all kinds of ague (fever) cure — a couple of shelves on one side of the store was stocked with a good supply of all kinds. Nearly everybody in them days shook with chills or ague and everyone had a specific kind that would help. A favorite home remedy was boneset tea — Oh, how bitter it was — others claimed to eat a big fill of raisins would cure.

I cured a bad case of the shakes with a big overdose of Piso Cure for Consumption — never shook again after that!”

He said that the ague was caused by using mucky water from open wells. About 1879, driven wells were introduced to the area and came into general use, and the ague disappeared, along with the shakes.

He told that in 1875 the total number of families in Lincoln Township, Newton County, Ind., was about 25, scattered about the land, all apparently getting along very nicely. Most of these families came into the area in the years 1875 to 1879, he said.

At that time there was fence law in Lincoln Twp., when the settlers could vote for free range for stock. All those having fields of grain were compelled to fence their land with a three-rail fence or better, and no barbed wire was used in that area.

Many of the farmers would travel to Kankakee or Wilmington to bring back cattle to graze in the Kankakee Valley for the summer months. The branded cattle would be returned to their owners about Oct. 1 of each year, and the herdsmen would receive $1.50 per head. The herder would stay with the stock all day, and at night corralled them in a stockade seven feet tall.

Max Ahlgrim never finished his interesting story as he had planned, probably due to the illness prior to his death in 1934. 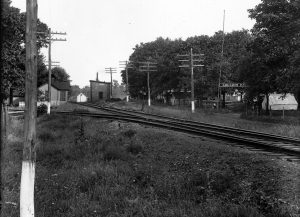 He built his frame home in Shelby soon after they moved in 1893, on the land known for years as “Ahlgrim’s Park,” where many came on the Monon Railroad to picnic. He also ran a small steamboat on the river, and would take sports enthusiasts (including this writer’s father) to their favorite haunts in the Kankakee Valley.

Max married Ida Parks and they became the parents of eleven children. Edith Haslett is the only surviving child. The children included Minnie Sirois and Clara (Mrs. Mel) Jones.

Kenneth Jones of Lowell, grandson of Max and Ida Ahlgrim kindly provided most of the information for this column.