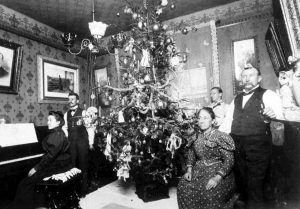 I believe Lew Wallace is perhaps the greatest Hoosier to date. Wallace was a true Renaissance Man in all aspects. His list of accomplishments is dazzling! They include: Civil War Major General, Territorial Governor of New Mexico and Minister to the Ottoman Empire. His other interests include: photography, music, painting and writing. Wallace’s most recognized work is the novel “Ben-Hur: A Tale of the Christ.” 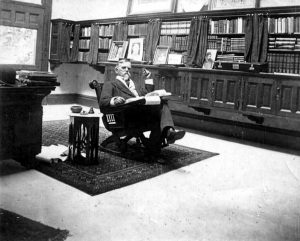 Lew Wallace in his study.

The Ben-Hur novel consists of eight books. Wallace referred to Book One as “The First Christmas.” It covers the story of the three Magi and the birth of Christ. The following books tell of the fictional life of Jewish noble Judah Ben-Hur and his ordeal under Roman rule. It depicts his life of a high-born to that of enslavement aboard a Roman Galley. Ben-Hur becomes a follower of Christ after being shown the true light of compassion.

It is believed that Wallace was inspired to write Ben-Hur after a lengthy discussion with the well-known agnostic and public speaker, Robert Ingersoll. After his conversation with Ingersoll Wallace set out to explore and discover his own personal Christian beliefs. The Ben-Hur novel was written over the course of seven years and published in 1880. It was an immediate hit and the leading bestselling book until the publishing of “Gone With the Wind” in 1936. 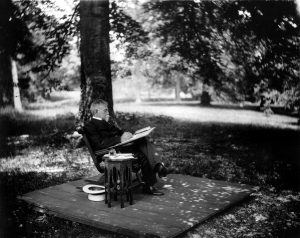 Soon after the success of Ben-Hur was realized Wallace was approached by many to allow his book to be adapted as a play. Wallace refused for his book to be set for the stage. Wallace fervently believed in Christ’s divinity and a man acting as Christ would be sacrilegious. His position would not change even after twenty years of pursuit by numerous playwrights.

By this time I would guess that you are thinking fine and good, but what does all of this have to do with the history of the Kankakee River and this special Christmas Day River Bits column. 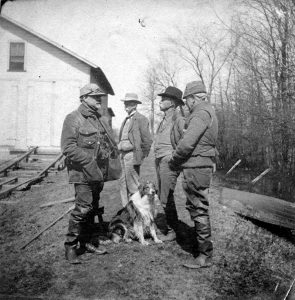 Well, in 1898 there was gathering at the Pittsburgh Gun Club at Baum’s Bridge of Playwright William Young and Stage Producers Marc Klaw and A. L. Erlanger. Much of source material for this column comes from Young’s publication “Ben-Hur’s Stage Career.” Joining them at the Pittsburgh was the famous veteran Logansport actor Walker Whiteside. Whiteside was a very close and trusted friend of Wallace. Whiteside and Wallace hunted for many years together on the Kankakee. The dilemma was how to make the stage adaptation of Ben-Hur and still satisfy Wallace’s objections of Christ’s depiction. A solution was found! Young wrote: “The general had for over 20 years refused to listen to propositions for staging the story because he would not have the figure of Christ portrayed on the stage. It was Mr. Whiteside who suggested the ‘beam of light’ effect that was adopted.” The “beam of light” represented the image of Christ.

The “beam of light” answer was to be honored and followed by all future stage and screen adaptations. This group of talented Pittsburgh Gun Club guests solved the Ben-Hur roadblock! This solution has allowed us to experience Lew Wallace’s play and later three movie vision of “The First Christmas.” Ben-Hur also shows us Lew Wallace’s struggle to find his own Christianity and humanity after the horrors experienced on the Civil War battlefields. 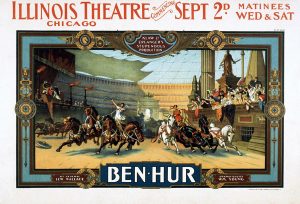 In yesterday’s special Christmas River Bits column I told the story of Lew Wallace’s “Ben-Hur: The Tale of Christ.” After publication in 1880 Ben-Hur went on to become a worldwide smash and is still in print–even in eBook format.

Walker Whiteside was able to resolve Wallace’s objection to making his book into a play with his “beam of light” depiction of Christ solution. The stage play opened on Broadway on November 29, 1899. It was an instant hit! The first production ran until May 10, 1900 with a total of 194 performances. It reopened in September, 1900 and ran until April, 1920. After running 21 years approximately 20 million people worldwide viewed 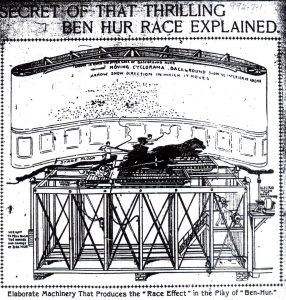 the play. Estimated earnings were around $10 million. Oh, you may ask how they solved the chariot race in a playhouse problem. The producers engineered an ingenious contraption consisting of treadmills that the horses and chariots ran on. After seeing the play Wallace quipped: “My God, did I set all of this in Motion?”

Lew Wallace passed away on February 15, 1905, but that did not stop Ben-Hur from being produced in new media forms. Ben-Hur’s next production was set on the silver screen! In 1907 a 15-minute long silent movie was produced by the Kalem Company. The movie industry was new at that time and Kalem was especially green. They did not get screen rights for the book, and were quickly sued by the Wallace family for copyright violations. Kalem lost in court and forced to pay $25,000 plus expenses. Quite a bit at that time! 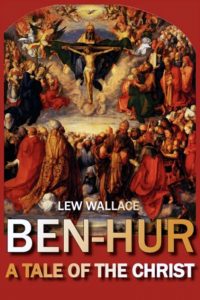 Although, the 1907 Ben-Hur film production was under a cloud of controversy there was a keen interest to produce a full-length screen version. Lew Wallace’s son Henry was the Wallace family representative and he objected to a film version. He felt the movie industry, as a whole, lacked any redeeming qualities and could not possibly create a film to the standards his father would approve. This did not stop the pursuit by film companies. Klaw and Erlanger produced the 1899 stage adaptation of Ben-Hur and they began negotiations with Henry for a film production. Henry relented after seeing the quality of “Birth of a Nation.” Shooting began in 1923 and the film premiered on December 30, 1925. The film was a huge success and grossed $9 million worldwide. Tragically, Henry Wallace fell ill while attending the premier and passed away on January 9, 1926. 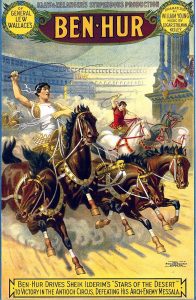 The next Ben-Hur film opened on November 18, 1959. At that time it was the costliest film to date at over $15 million. That would be $125 million in today’s dollars. The gamble paid off! The 1959 Ben-Hur film made a $21 million profit on its initial release–saving MGM from bankruptcy.

I believe that Ben-Hur is much more than a story about a Jewish noble who after many hardships and tragedies finds the path that leads him to become a follower of Christ. I feel that Ben-Hur is actually a story about a Civil War General from a small Hoosier city on the banks of the Wabash River who struggles to rediscover his personal Christianity. Ben-Hur confirms that Wallace found his Christ and the comfort that it gave him for the rest of his days. Merry Christmas!