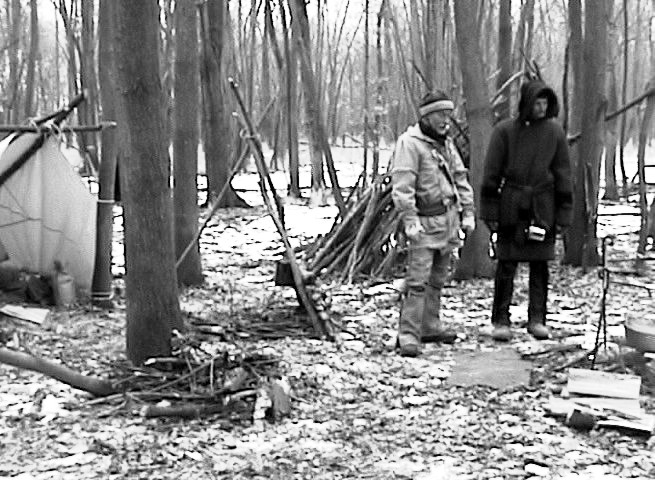 I last left you with Kankakee River Legends Killbuck and LaBonta hunting and trapping in the Rocky Mountains. LaBonta is on the run from the Memphis constables after the killing of his rival in a duel over his sweetheart, Mary Brand.

For many years in the Rockies LaBonta dreamed of returning to his home and especially to his first love, Mary Brand. But, as time passed he became more and more wedded to this wild and desolate life. McFadin wrote that after “a long time hunting up in the mountains, their rifles, from long use had played out, and being out of ammunition, they were about starving to death for the want of meat, they concluded to go down to the Oregon trail and meet some emigrants and get some supplies from them.” After a long trek they met a Scotchman who pitied their condition and “generously gave them a fine rifle and a blanket apiece, and plenty of ammunition and a pony each…he also informed them that a short distance back on the trail there was a small company of emigrants and he was afraid the Indians would attack as the party was very small. “Being resupplied they quickly went to assist the other party. “After traveling a short distance they heard the Indians war whoop and the firing of guns.” Entering the fray “LaBonta saw a big Indian have a young woman by her long black hair and was about to sink his tomahawk in her head.. .and in a single stride he was upon the Indian and thrusting the muzzle of his rifle into his very breast he pulled the trigger driving the savage backward by the blow itself at the same moment that the bullet passed through his heart and tumbled him over stone dead…LaBonta then returned to the young lady that he had saved, who had fainted away and found her still lying down as if dead; he raised her up gently and upon turning up her face to thank him beheld his never to be forgotten Mary Brand. They were married and after several years of happy life, she died and passed over on to the other shore, leaving LaBonta weeping on the other side, who after a short time became gloomy and lonesome.” Amazing story!

After Mary’s death Killbuck and LaBonta returned to the Kankakee and settled on French Island. In Philip E. Vierling’s Kankakee Marsh Historic Place Names he locates French Island in the center of Section 16 in Keener Township of Jasper County and around 5 miles downriver from Baum’s Bridge. Werich wrote in his Pioneer Hunters of the Kankakee: “There were two or three French families on the island who had settled there years before and for this reason it derived its name French Island. There were also four or five Indians living on the island at this time and among them lived an old Indian, and his aged squaw, by the name of Sheubana. He was at the Ft. Dearborn massacre and saved a great many of the whites. He was over eighty years of age when found on this island by the white hunters in the winter of 1858 and of whom 1 obtained this narrative.”