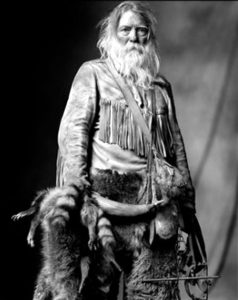 Another early Kankakee River pioneer was LaBonta. This is another tale where the details are a bit sketchy. With all written about him I have not discovered his first name. McFadin wrote of LaBonta “He was a splendid specimen of a man 6 feet tall and straight as an Indian and about 40 years old and of French extraction. His father was a St. Louis Frenchman, his mother a native of Tennessee.” He traveled with “his father to St. Louis every spring and saw the different bands of traders and hunters start upon their annual expeditions to the mountains.” This is where he decided to take up the life of a hunter and trapper.

What motivated LaBonta to up and move to the Rockies is a another story. LaBonta had a sweetheart in Memphis County named Mary Brand. McFadin recounted this story in the language and trappers phrases as told to him by LaBonta. McFadin wrote: “Mary Brand was called the beauty of Memphis County and was tall, straight and slim as a hickory sapling, well formed withal, and neck like a swan…and from their meeting he was a gone beaver..and all he thought of was Mary Brand. Well, LaBonta fell in love with pretty Mary, and she with him.” LaBonta was a tall strapping lad of 20 and the best hunter and rifle shot in the county. How could Mary resist that! McFadin continued: “He had only one rival in the person of a little schoolmaster. It was during “a corn husking, where all the young folks meet and have fun. It is a rule at corn husking that boy or damsel who finds a red ear has a right to kiss the one in the party that they like best. The schoolmaster found a red ear, and sitting close to Mary hastily snatched a kiss from her. This aroused La Bonta who grabbed a small whisky keg and hurled it at his rival. Well to make the story short the result was a duel with rifles, distance 100 yards to load and fire until one or the other dropped; LaBonta killed his man.” LaBonta was on the run! He was able to avoid the constables, but the pursuit would never end so he decided to leave Memphis. McFadin wrote: “Before starting he sought and obtained a last interview with Mary Brand. He told her: “They are hunting me like a fall buck, and l am bound to quit. Don’t think about me any more for I never shall come back. Poor Mary burst into tears and beat her head on the table where she sat. When she again raised it she saw LaBonta his long rifle on his shoulder, striding with rapid steps from the house. Year after year rolled on and he did not return. LaBonta made his way to the Rocky Mountains with a trapper and hunters outfit, where he came across Old Killbuck and…they became firm and fast friends ever afterwards and stood by each other in many Indian fights, until the death of Killbuck separated them.”

After many hair raising adventures in the Rocky Mountains Killbuck and LaBonta decided there was too much danger from Indian attack in the Rockies and removed themselves to the Kankakee Marsh where they hunted and trapped for the rest of their lives.